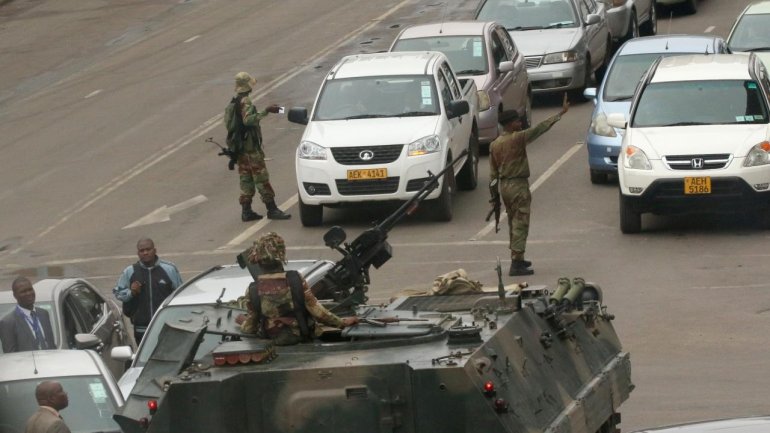 Soldiers and armored vehicles blocked roads to the main government offices, parliament and the courts in central Harare, while taxis ferried commuters to work nearby, a Reuters witness said.

“We are only targeting criminals around Mugabe who are committing crimes that are causing social and economic suffering in the country in order to bring them to justice,” Zimbabwe Major General SB Moyo, Chief of Staff Logistics, said on television.

“As soon as we have accomplished our mission, we expect that the situation will return to normalcy.”

Neither Mugabe nor his wife Grace, who has been vying to succeed her husband as president, have been seen or heard from.

Zimbabwe’s opposition Movement for Democratic Change called for a peaceful return to constitutional democracy, adding it hoped the military intervention would lead to the “establishment of a stable, democratic and progressive nation state”.

The leader of Zimbabwe’s influential liberation war veterans called for South Africa, southern Africa and the West to re-engage Zimbabwe, whose economic decline over the past two decades has been a drag on the southern African region.

“This is a correction of a state that was careening off the cliff,” Chris Mutsvangwa told Reuters. “It’s the end of a very painful and sad chapter in the history of a young nation, in which a dictator, as he became old, surrendered his court to a gang of thieves around his wife.”

Finance Minister Ignatius Chombo, a leading member of the so-called ‘G40’ faction of the ruling ZANU-PF party led by Mugabe’s wife Grace, had been detained by the military, a government source said.

Mugabe, the self-styled ‘Grand Old Man’ of African politics, has led Zimbabwe for the last 37 years.

Just 24 hours after military chief General Constantino Chiwenga threatened to intervene to end a purge of his allies in Mugabe’s ZANU-PF, a Reuters reporter saw armored personnel carriers on main roads around the capital.

The United States and Britain advised their citizens in Harare to stay indoors because of “political uncertainty.”

The southern African nation had been on edge since Monday when Chiwenga, Commander of the Zimbabwe Defence Forces, said he was prepared to “step in” to end a purge of supporters of sacked vice president Emmerson Mnangagwa.

Only a few months ago, Mnangagwa, a former security chief nicknamed “The Crocodile”, was favorite to succeed his life-long political patron but was ousted a week ago to pave the way for Mugabe’s 52-year-old wife Grace to succeed him.