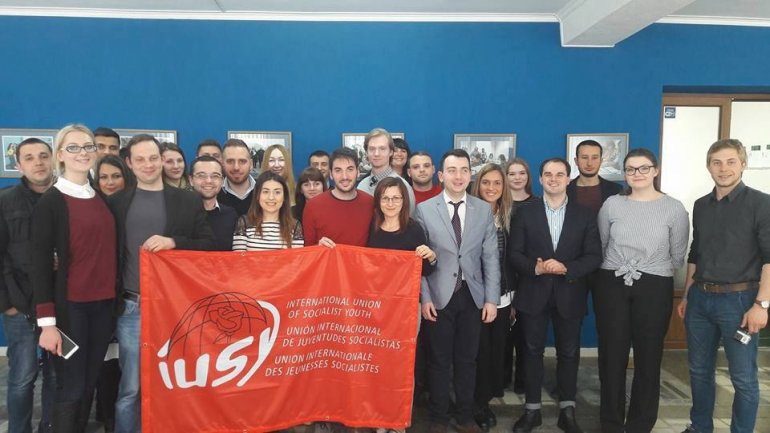 The Youth Organization of the Democratic Party of Moldova hosted the annual conference of the International Union of Young Socialists (IUSY) during April 20 to 23rd, 2017.

The event brought together leaders of the social-democratic youth organizations from 7 countries (Romania, Bulgaria, Ukraine, Georgia, Armenia, Belarus and Moldova), as well as Swedish Social Democrats and Speakers and Democratic Party of US.

Mainly, the discussions focused on issues of European identity and on the role and contribution of young people in the decision-making process in society. During the workshops, the participants assessed the possibilities of involving each organization at national and international level in order to promote the aspirations of all young people in the region.

Other important topics on the agenda included the fight against corruption, gender equality and the political and social empowerment of women, as well as electoral reform.

The event was led by IUSY Secretary General, Alessandro Pirisi, who was satisfied with the performance of the delegations of the member countries.

Also, the leaders of Youth Organization of PDM have raised the discussion regarding the reform of the political class and the electoral system.

The conference highlighted in the adoption of a joint resolution by which young people declared themselves against any form of gender discrimination and in favor of reaching gender equality, encouraged young people's involvement in decision-making at all levels, condemned the armed conflicts and underlined the role of young people in the development of the socio-democratic ideology.

The Youth Organization of the Democratic Party of Moldova became a full member of the International Union of Young Socialists (IUSY) in May 2014, thus joining a structure with a tradition founded in 1907 that brings together over 150 youth organizations worldwide.