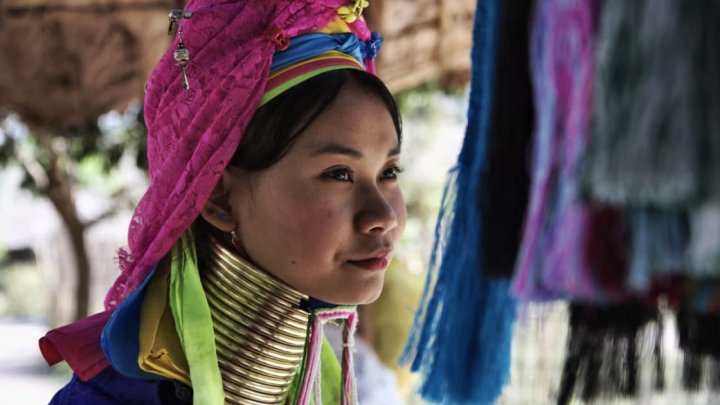 83-year old Maria Khaing, is a Kayan women, from the Kayah region of Myanmar.

She wears bronze rings which appear to elongate her neck.

Maria has worn the heavy, gleaming embellishments around her neck, knees and wrists since childhood. She first started wearing the neck rings at age eight, before switching to heavier rings at 13.

Maria, who got her name from Italian missionaries many years ago, lives in Pan Pet Village.

She still cooks and eats with the rings on and weaves her own clothes.

Maria is spending time with her grandson Maung Ko Kaw, a regional tour guide. Her grandson has brought her chocolate from the nearest town, about one hour's drive away.

Maria says she began wearing the rings when she was young.

"I started to wear the rings when I was eight. My dad told me I looked like a boy. He said, 'so I will buy you a gun to hunt as a man'. But I said, 'every girl is wearing the rings, so I want to wear the rings too'," she says.

She has never removed them, herding cows and driving ox-carts through fields in them for decades.

"It is comfortable. At first it was hard but now it's fine. I eat and food goes in."

While wearing neck rings was once an expectation of women in Kayan society, women like Maria are becoming increasingly rare.

Cultural analysts estimate there are now fewer than one hundred long-neck women across the whole of Myanmar, falling from 300 to 400 such women in Shan and Kayah states alone, several decades ago.

With more awareness of how the practice crushes collarbones – rather than extending necks – along with the discomfort during swallowing, and the changing fashion tastes, young Kayan women are increasingly shunning the tradition.

Among them is Maria's granddaughter, 20-year old Za Za Oo, who also lives in the village.

Za Za has chosen not to wear rings, and wants to work as a shop assistant or a domestic helper in Thailand, or Singapore instead.

She says there are several reason why she does not want to wear them.

"They're heavy and uncomfortable. Also I don't know much about them that's why I don't wear them," she says.

He says he wants tourists to see women like his grandmother as people, and respect them as such.

"When I bring guests to here, I want to let them know the true story of people in here. These people are also my people, so why people calling them as a 'human zoo', 'giraffe women', like a 'Padaung'. Our original name is Kayan," he says.

The area has seen an increase in tourism in recent years, following a ceasefire in 2012 between a local armed group and the Myanmar Army.

Many Kayans, including many of the long-necked women of Pan Pet, had fled to Thailand during the fighting.

But slowly they are returning.

47-year old Mu Pye, who wears the rings, recently returned from Thailand. She now sells her own hand-woven scarves.

Tourists to the area help her earn a living in her native land.

In the peak tourism month of January, 2018, data provided by the Kayah State Tourism Office showed 291 foreigners visited Pan Pet, generating about 1,900 US dollars for the village, up from about 486 US dollars when 63 foreigners came in January 2017.

Mu Pye says increased tourism is a bonus for the area.

"They (tourists) have never seen us, and we have never seen them so we are happy. And if they buy something from us we are even more happy because we can make some money," she says.

Most operators in the area now use Community Based Tourism (CBT), creating income for villagers when visitors spend on their crafts, home-stays, cooking and local guides, with 10 percent of the revenues going to their local Community Fund.

48-year old ring-clad Mu Tu has also returned from Thailand.  She is now selling handicrafts and playing guitar to pass time in the rainy season.

Mu Tu is one of the few women who knows how to make the bronze rings and put them on.

Mu Tu is showing a younger girl, Mu Lo, how to do it.

The application process takes about 30 minutes.

18-year old Mu Lo, who also lives in their village, does not usually wear neck rings, but tried on Mu Tu's rings.

"The first time is not comfortable. But you get used to them," she says.

She says she used to wear them but gave up.

"I wore the rings for a long time before," she adds.

Mu Lo had Mu Tu remove the rings immediately after trying them on.

"The shorter sets are easier to make. Everyone has their own preference. So if someone doesn't like what you've put on, you have to take it off and start over," she says.

But safely is always a concern.

"If you don't make the rings correctly, someone can choke," she adds.

Kayah's burgeoning tourism is a bonus for the area; supporting local development and encouraging more refugees to return from Thailand, according to senior Kayah State guide, Htay Aung.

With more Kayan people returning to Pan Pet, more money is coming to the village.

But as more young Kayan women chose to leave traditional practices like wearing neck rings behind, it is unclear how long the area's famed long-necked women will be visible.