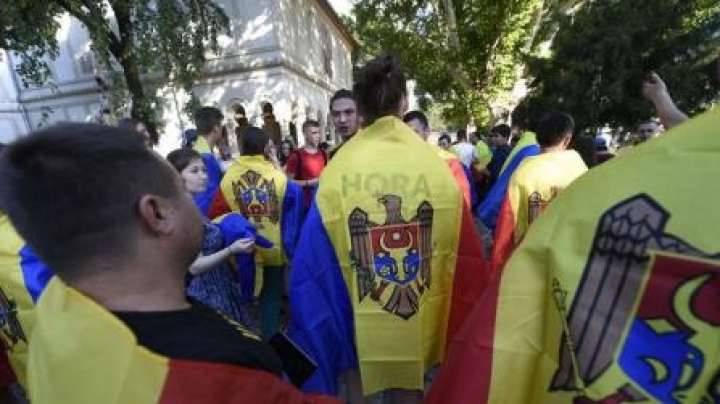 Over 100 youths from Bucharest and from the Republic of Moldova participated on Friday, on the Sfantu Gheorghe Square of Bucharest, at Romania's kilometer zero, in a flash mob organized by the Actiunea 2012 Unionist Platform.

The event also marked the occasion of the launch of the basarabia-acasa.ro website (e.n. — name translates to Basarabia — Home, Basarabia being the name used by many Romanians for the region between the Nistru and Prut rivers, comprising most of the Republic of Moldova currently). The website encourages Romanians on both sides of the Pruth river to meet and visit each other.

"Today we are starting the project through which we intend to bring Basarabia home. We have started with the twinning of localities and institutions, we will continue with the brotherhood between people and we expect all Bucharesters to take 'a brother' from Basarabia from our platform, www.basarabia-acasa.ro, because it is a pity that in the information and technology age for Romanians to not know Romanians. I am from Chisinau and I want to meet someone from Targu Mures. Now is the time for the Romanian nation to reintegrate, to unite and know each other better," said, for AGERPRES, Sorin Becciu, a Chisinau member of the Actiunea 2012 Unionist Platform.

Fifty youths from Basarabia and just as many from Bucharest have joined in a 'hora' (e.n. — circle dance), with tricolour flags of Romania and the Republic of Moldova in their hands, dancing and singing the 'Hora Unirii' (e.n. — Union Hora) and the chorus of 'Fratele meu de peste Prut' (e.n. — My brother over the Pruth river). At the end, the youths exchanged flags and hugs.