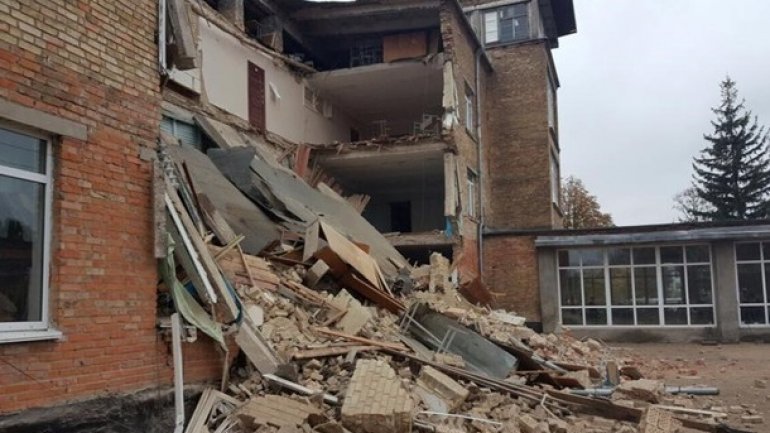 A 31-year-old man has deceased in Cimişlia after the wall of the regional Council fell over him. The incident took place last morning during some repair works at the building's first floor.

When the wall gave out, two engineers were also nearby, inspecting the work, but luckily were not hurt.

According to the police and regional administration, the victim was demolishing the wall from the bottom, going upward. At a given moment the wall fell and the two engineers who were also nearly crushed managed to jump aside.

President of Cimişlia district, Mihai Olărescu, declared that the building is set on one of the safest zones from the seismologic point of view. Therefore, the accident could not have been caused due to weak construction.

"The problem was that the employee was careless. From what eyewitness said the man was demolishing the wall incorrectly, doing it from the bottom to the top. This is what caused the walls to give away and fall, resulting in the man passing away" Mihai Olărescu said.

Other employees that were on the first floor have luckily once received a scare.

"There were loud sounds all over the place, as people were working above. Then there was this crash and that's it. It was very scary, how could we not have been scared?"

"We never saw what happened. There was this loud noise, afterward many voices of men started shouting, but we couldn't understand what happened. We we approached, we saw a person calling for an ambulance and another men, who I didn't knew at the time that was dead, on the ground."

According to Emergency Situations and Civil Protection Services, rescuers were dispatched to the site, while police begun a criminal file. From the first information made available by law enforcement it was established that the employees from the construction site lacked proper equipment and ignore the safety regulations.

"We begun a criminal file based on article 183, line 2, about breaching the safety regulation. We noticed that employees lacked caps" Chief of Cimişlia Police Inspectorate, Dan Pârlici declared.

The young man was born in Drochia and begun working on the construction site from Cimişlia at the beginning of autumn.

The economic agent hired for the work was not found to comment the situation. If found guilty, it risks 2 to 6 years of imprisonment. The repair works are performed on 600 meters and is meant to open a new office for the Public Service Agency. The repair works were suspended until further notice.