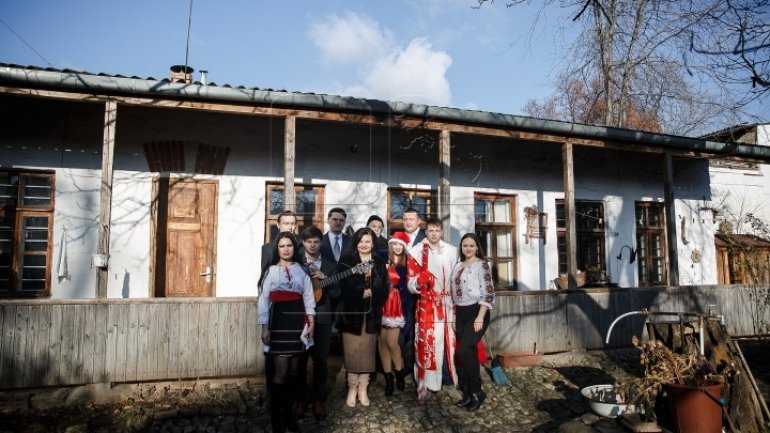 Knocking at the door of famous artists to bring them gifts and thanks for their accomplishments. Young people from the Democratic Party from Moldova (PDM) have launched the campaign named in Romanian "Fii chiar tu Moș Crăciun!", and translated as “You can be Santa Claus yourself!”

Ten of them headed by Culture Minister Monica Babuc paid visits to artists living in Chisinau. Vividly excited, the artists say their winter holidays are going to be more beautiful because of their guests.

The Moldovan poet and translator Igor Creţu, 94, showed himself much surprised, and the young people helped him forget about hardships: "I did not expect them to come today. After this stroke that I got, now you have taken away that hardship. I have forgotten about all the evils. It’s something pure and spiritual here."

The young democrats also went to painter Igor Vieru’s widow. The lady was so excited she could not help hold back her tears. After singing carols to her, she gave them hugs.

The 90-year-old woman said it was a long time since nobody had paid her a visit: "Let me kiss you, let me hug you. I barely know how to thank you. I’ve never seen, never heard of such a thing. Nobody has ever come to me. So here we see God has made it true. Missis Minister is a wonderful woman. Thank you very much and may you have nice holidays.”

Then they went to sing carols to the painter Valentina Rusu-Ciobanu, who is now 95.

The young Democrats offered her a basket with gifts so that the woman may have a rich table on holidays. The great artist, whose paintings marked an era in the history of the Moldovan fine arts, was impressed at the youth’s gesture: "It’s very, very nice. It’s a big surprise. I am glad, ill but glad."

The king of the Moldovan humor, Gheorghe Urschi, also received the carol singers. The master was impressed to tears.

Natalia Cibotaru, a member of the PDM Youth Organization, says the artists deserves attention each day, not only on holidays: "We have visited today elderly people who had made enormous efforts in building the Moldovan culture. I have decided to bring them a piece of happiness on the occasion of the winter holidays."

"On the eve of the winter holidays, my Democrat friends and me have decided to bring joy on some people’s faces. We’ve said let’s go to these elderly who had been famous some time ago, and now they are unfortunately forgotten," said Iulian Petco, a member of the PDM Youth Organization.

"I was glad at this idea, because the Culture Ministry has always done so. We will continue to pay attention to the people who have left valuable masterpieces in our cultural heritage," said Culture Minister Monica Babuc.

The young Democrats promise they will return to the great artists on other occasions, too.