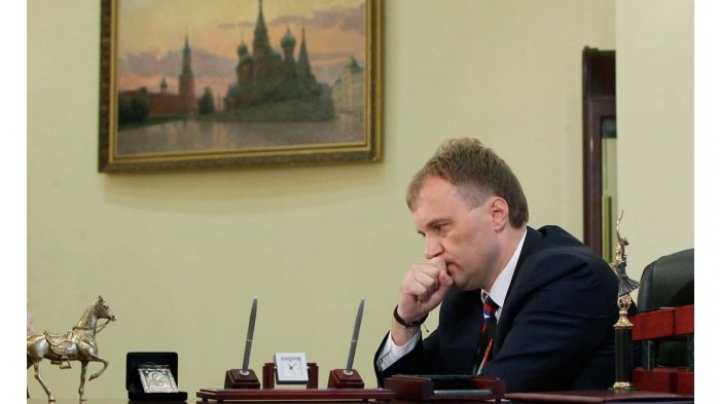 The leader of the breakaway Transnistrian Moldovan Republic, Yevgeny Shevchuk, has become the subject of a juicy scandal dealing with the embezzlement of money from the financial assistance provided by Russia, as well as from incomes coming from the sale of Russian gas. According to Moscow-based media, a petition was sent to the inquiry committee of Russia, with a request to investigate “the disappearance of tens of millions of roubles, in which the leader of the breakaway republic might be involved”, reports MOLDPRES.

The charge was made public in late last week at a news conference in Moscow, held by the inquirer of the so-called inquiry committee of the Transnistrian republic, Aleksandr Kharchikov. The latter directly accused Shevchuk of “eventual machinations.”

According to Kharchikov, “most of the money coming from the sale of Russian gas in the Transnistrian region goes to offshore zones, and inquirers investigating the circumstances of the transfers and are ready to bring charges against the Transnistrian leader, are bribed for not carrying out the controls properly.” Kharchikov stressed that that his petition to the Russian inquiry committee was triggered by the fact that “the investigation of the circumstances of the embezzlement of millions of dollars coming from the sale of gas is practically collapsing in Tiraspol.”

The inquirer said Russia provided to Transnistria low-price gas, which represents a material aid, from which pensions and other social payments are provided in Transnistria, kindergartens and schools are built. The gas is delivered to the Moldova hydro-electric power plant, which belongs to the Inter RAO Russian company. With gas, electric energy is generated, which is subsequently sold to Moldova.

According to the Transnistrian inquirer, the eventual corruption scheme started being enforced in late 2014, when the firm Energokapital was opened in Tiraspol. The company became a mediator between the Russian company Transgaz and the Moldovan hydro-electric power plant. Till 2015, the Moldovan enterprise was buying gas at a price of about 150 dollars for 1,000 cubic metres; yet, afterwards, this sum was cut to a half for Energokapital. Kharchikov believes that, Energokapital would have been able to transfer over 19 million dollars abroad following these combinations in 2015 alone.

Aleksandr Kharchikov said that he had had to address to the Russian inquiry committee, as “the situation can no longer be tolerated and it cannot be settled in the Transnistrian republic.”

More Russian lawyers reacted to statements by the Tiraspol inquirer. They said the statements are “serious charges to the executive power and a high-ranking person.”At the same time, they did not rule out the opening of a criminal file.

At the same time, the head of the Transnistrian Diaspora from Russia, Nikolay Serdtsev, demanded that an independent audit on the use of the Russian material aid for Transnistria, provided in the last 20 years, be initiated. “We must learn where the money which had failed to reach the hospitals, children, old people, went. In the last three years, the region has had no budget, no reports, no official reports from the supreme soviet – nobody knows where the money is going, and who tries to learn this is facing personal inconvenience,” Serdtsev said.

Media outlets from the Transnistrian region have been signaling a deep “conflict of power” in Tiraspol. Thus, at an extraordinary meeting of the Transnistrian parliament from 11 April, a commission was set up to consider the reasons from the financial crisis of the region. The decision was taken after the deputy speaker, Galina Antyufeyeva, had charged Shevchuk of corruption. She urged the “president” “to return a sum of one hundred million of dollars, purloined in the wake of the activity of civil servants and his friends.”According to Antyufeyeva, fraudulent schemes of electric energy sale have been created with the agreement of Shevchuk.

The commission had to clarify the reasons for the cut in the gas rates for the company exporting electricity Energokapital, to check the work of the stabilization fund, created at this enterprise, as well as to control the evidence on the switch of 25 per cent of the stocks from the Ribnita-based cement mill into the ownership of the authorities.

For his part, Shevchuk turned down the charges. “These are failed attempts to attract me into a political crisis, just as some of the lawmakers want it, who brought charges against the leadership of the republic and economic agents. The competent bodies have already started controls based on concrete deeds,” Yevgeny Shevchuk stressed.

At the parliamentary polls from November 2015, the party Obnovlenye (Renewal) picked up more than two thirds of the mandates of the Transnistrian parliament; this party is in opposition to the present leader Shevchuk and is backed by the Sheriff holding. This allowed the opponents of Shevchuk not only checking the legislative body of the region, but also amending the local constitution.