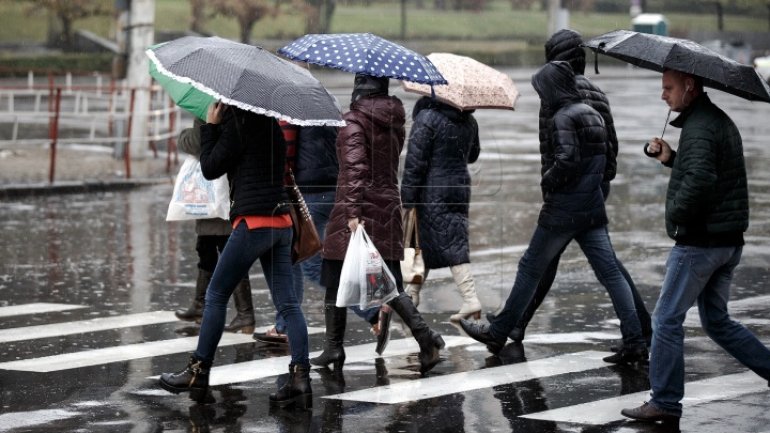 Meteorologists brought bad new. The weekend will be filled with rain and lightnings. The wind is expected to pick up to 70 km/h and a high risk of fire.

The Capital will be greeted with 19 degrees Celsius at most.

PUBLIKA reminds Dozens of houses and hundreds hectares of orchards were destroyed, as a result of last evening's hail in Cunicea village, Florești district.

Representatives from Civil protection and Emergency Situations Service will soon establish the damages.

The hail tore apart 50 houses from Cunicea. People say that it came unexpected and lasted a short period of time, yet managed to do grave damage. Some were left without a roof right when winter is nearby.

Some even lost their cars. Those parked outside were heavily dented because of the big chunks of ice. A man now has to repair two cars, the roof of his house, as well as replace the glass from the door and windows.

The hail managed to destroy over a hundred hectares of orchards from around the village. Simion Danțov has lost most of his apple trees from the  50 hectares he owns. He claims that now those fruits will be useless, not even juice could be made out of them. Simion Danțov declared that despite it lasting only around ten minutes, the damages were of million and he lack an insurance.

"Now the ice has melted a bit. Can you imagine how big the chunks initially were?"

Vitalie Moraru had 5 hectares of strawberry, but now there nothing left.

The nearby village, Ciripcău had an anti-hail system installed on 60% of its plains.

Authorities from Florești district admitted that they don't have enough money to reimburse the damages.  Cunicia village budget is of 14 thousand lei.

Other regions from the North were also affected. In Olişcani village, from Şoldăneşti, the wind has managed to destroy the roofs of a middle school, a hospital and of a few houses. In Cobîlea it was reported that the element harmed 40 hectares of orchards and 21 hectares of soy.  In Chersac village, Teleneşti, the powerful wind has managed to tear off the roofs of a few houses.

Ukraine has not fared any better.

In Berdîciv, from Jîtomir the hail has managed to destroy a few houses and cars.