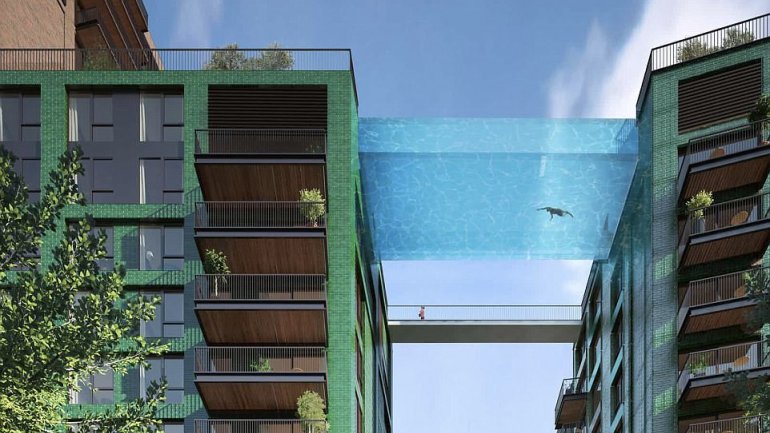 The world's first sky pool, a staggering see-through stretch of water that will float between two luxury skyscrapers under construction in London, wrote dailymail.co.uk

The two residential skyscrapers that the pool is wedged between are next-door to the new $1 billion US embassy due to open in January, meaning residents will be able to watch diplomats in action while they swim.

The 25-meter long, three meter deep crystal clear pool will allow members of the development's exclusive club to glide between buildings 10 storeys up in the sky.

The development, called Embassy Gardens is on London’s South Bank, a short walk from the MI6 building and Battersea Power Station, meaning swimmers can take in views of London, even looking over the river at Westminster Abbey and the Houses of Parliament.

A 'Sky Deck' - at the top of the two buildings - will also feature a spa, summer bar and Orangery for residents to relax.

The building is the complete opposite of the moat being constructed at the embassy, which is designed to thwart any form of terrorist attack.

Developers Ecoworld Ballymore's CEO, Sean Mulryan, said: 'My vision for the sky pool stemmed from a desire to push the boundaries in the capability of construction'.

The transparent 'sky pool' will be the first of its kind in the world, giving swimmers the ability to look 35 meters down below, with only 20 cm of glass between them and the outside world.

It's not just one pool either. Residents will also have access to an indoor pool, a gym and spa, a private cinema, meeting rooms and luxury communal areas.

In 2014, London’s Shangri-La Shard hotel opened the highest pool in Western Europe - and one of the highest in the world. Set on the 52nd floor of the Shard near London Bridge, the 1 meter infinity pool is 182 meters above the city and offers views of some of London's most famous landmarks.

The King Street Townhouse hotel in Manchester is currently shortlisted for the Mr & Mrs Smith Hotel Awards for the accolade of Best Pool with a View. The results are announced in the new year.

The judges say this pool is 'inspired'. It's a 'four-meter by four-meter spa pool that doubles as a giant Jacuzzi, with one wall opening out to unrivaled views of the clock tower and spires of Manchester Town Hall. In short, we’re mad for it'.