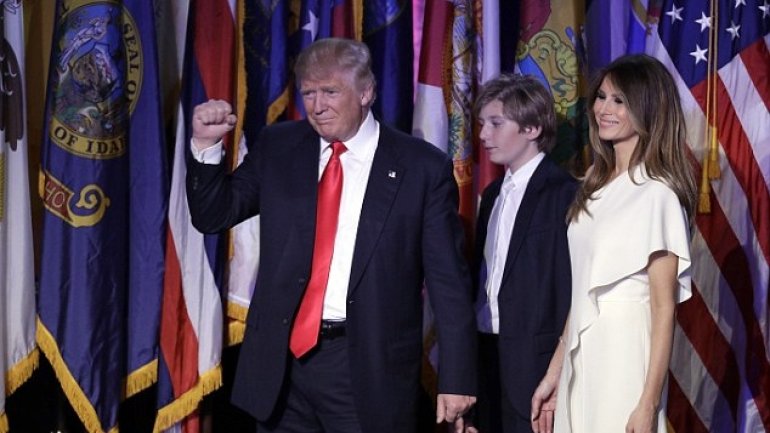 World leaders have reacted with disbelief to the surprise election of Donald Trump as US president - and Russian President Vladimir Putin has become one of the first to congratulate the Republican on his win, reports Daily Mail.

A senior figure in the German government has described the result as a 'huge shock', and questioned whether it will mean an end to 'Pax Americana' - the state of relative peace overseen by Washington since the end of World War Two.

And the current French ambassador to the United States wrote that the 'world is collapsing before our eyes' in an astonishing attack on the newly-elected President.

In a now-deleted tweet, before Trump's victory was confirmed, Gerard Araud wrote: 'After Brexit and this election, everything is now possible. A world is collapsing before our eyes. Dizziness.'

But the result has been welcomed in Moscow, where officials say they are optimistic of improved relations with the US under a Trump presidency.

Putin has sent Donald Trump a telegram of congratulation.

In a brief statement, the Kremlin said Putin expressed 'his hope to work together for removing Russian-American relations from their crisis state'.

Putin also said he has 'confidence that building a constructive dialogue between Moscow and Washington that is based on principles of equality, mutual respect and a real accounting each other's positions, in the interests of our peoples and the world community'.

The election was also greeted with delight by far-right leaders in Europe, with French National Front president Marine Le Pen among the first to voice their congratulations.

She tweeted:  'Congratulations to the new President of the United States Donald Trump and the American people, free!'

German Defence Minister Ursula von der Leyen, an ally of Chancellor Angela Merkel, described the result as a 'huge shock' and questioned whether it meant the end of 'Pax Americana', the state of relative peace overseen by Washington that has governed international relations since World War Two.

He admitted to being unsure what a Trump presidency would mean for key foreign policy challenges, from climate change and the West's nuclear deal with Iran to the war in Syria.

'Looks like this will be the year of the double disaster of the West,' former Swedish foreign minister Carl Bildt said on Twitter, pointing to Britain's vote in June to leave the European Union. 'Fasten seat belts,' he said.

He said: 'Current Russian-US relations cannot be called friendly. One would like to hope that a more constructive dialog between the two countries will be possible when the new president takes office.

'The Russian parliament will welcome and support any steps along these lines.'

The result was also welcomed by controversial far-right Dutch politician Geert Wilders, who has previously hit out at what he describes as the Islamification of the Netherlands.

After results came in for Florida and Utah, he wrote: 'The people are taking their country back. So will we.'

Australia’s extreme right-wing Senator Pauline Hanson congratulated Trump on his presidency and thanked Americans ‘for getting it right'.

Hanson co-opted Trump’s controversial statements and demanded that Australia ban all Muslim migration to Australia and once warned that the country was being ‘swamped by Asians’.

‘I’m so excited that Donald Trump looks like he is over the line and I’m so happy about it because this is putting out a clear message to everyone around the world that people power is now happening,’ she said in an online video posted shortly before Trump’s victory was confirmed.

Australian Prime Minister Malcolm Turnbull congratulated Trump on his surprise win and promised the two countries would remain allies through any conflict.

'We have no stronger relationship, whether it is on the battlefield or in commerce, than we have with the United States.

Italian Prime Minister Matteo Renzi, who had openly supported Hillary Clinton, congratulated Donald Trump on his victory in the US presidential elections and said Italy's ties with the United States remained strong.

'I wish him well. The Italo-American friendship is solid,' Renzi said at the start of a speech in Rome.

Renzi was one of the few world leaders to endorse Clinton and opposition politicians were swift to condemn him on Wednesday, saying that by doing so, he had weakened Rome's international standing.

Mexican Finance Minister Jose Antonio Meade and central bank chief Agustin Carstens are due to address the media early Wednesday to outline actions the government will take in response to the peso's fall.

Meade said last week he expected such market 'volatility' if Trump won, while Carstens said the government had an unspecified contingency plan in place to weather the storm.

Foreign Minister Claudia Ruiz Massieu, meanwhile, cancelled a late night news conference. An official said she would speak after both Trump and Clinton have spoken.

Turkey's justice minister said he is cautiously optimistic of improved relations with the US.

Bekiz Bozdag told the state-run Anadolu Agency on Wednesday: 'In essence our relations are relations between two states and we hope that under the new presidential term the Turkish-US relations will be much better.

'That is our expectation.'

Bozdag noted that Trump's win came despite intense campaigning in favor of his rival Hillary Clinton.

'No one has won elections through newspaper headlines, opinion polls or television (campaigns).'

Orban said in July that Trump's plans on migration and foreign policy were 'vital' for Hungary, whereas those of rival Democrat Hillary Clinton were 'deadly'.

Orban was then the first European head of state to express a clear preference for either of the two candidates.

Philippine President Rodrigo Duterte offered 'warm congratulations' to Trump and looks forward to working with him to enhance relations, a Philippine minister said on Wednesday.

Duterte, who has expressed outrage almost daily with the Obama administration and threatened repeatedly to end one of Washington's most important Asian alliances, hailed the success of US democratic system and the American way of life, Presidential Communications Secretary Martin Andanar said in a statement.

Duterte 'looks forward to working with the incoming administration for enhanced Philippines-US relations anchored on mutual respect, mutual benefit and shared commitment to democratic ideals and the rule of law,' he said.

Danish prime minister Lars Løkke Rasmussen said in a written statement: 'An exceptionally tough and confrontational American election campaign now ended. It is good that there now is a clarification on who should lead the US over the next four years, and I would like to congratulate Donald Trump. When the dust has settled, it is my hope that the next administration would continue the open and constructive cooperation that has characterized the United States for many years, says the prime minister. Europe needs a strong United States, which is leading the free world and is based on democracy and dialogue.'

Palestinian President Mahmoud Abbas wrote in a statement that he 'congratulates the elected American president, Donald Trump, and hopes that peace will be achieved during his term'.

An Abbas aide, Saeb Erekat, said Wednesday he doesn't expect US positions on the Israeli-Palestinian conflict to change under Trump.

Erekat said the Republican and Democratic parties are both committed to a two-state solution of the conflict and said: 'I think this will not change with the coming administration'.

Trump has proposed moving the US Embassy to Jerusalem, even though the US has not recognized Israel's annexation of parts of the city.