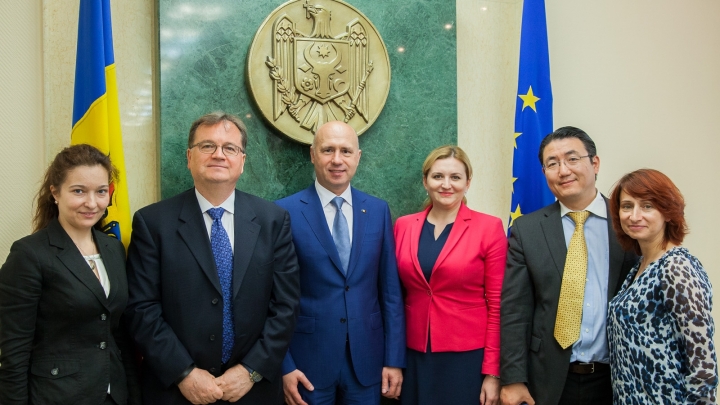 Prime Minister Pavel Filip today had a meeting with a group of World Bank’s representatives. The sides discussed the project, Moldovan Health Sector Modernization, implemented in line with the Agreement between Moldova and the International Development Association (IDA), based on the Country Partnership Strategy of the World Bank for 2014-2017.

The participants in the meeting exchanged opinions on modernizing the health system of Moldova and tackled a string of future actions for edifying an efficient and sustainable health care system. Prime Minister thanked the World Bank experts for the support provided, stressing that health was one of the main fields the Government was concerned about. "Moldova has carried out more important reforms in the health system, many of which are actively backed by the World Bank. At the same time, it is important to strengthen the previous achievements and deepen and extend the reforms, so that the residents of our villages, towns and cities have, to an equal extent, access to qualitative public health, medical and pharmaceutical services", Pavel Filip said.

For his part, Practice Manager, Health, Nutrition and Population Global Practice of the World Bank Enis Baris said the institution he represented would support in continuation Moldova in the health sector. "The project underway is correct, with a good and solid concept. There is room for discussions to extend it", the official noted.

The World Bank experts specified that special importance should be attached to primary medicine and actions to prevent diseases, which will allow improving the situation in the health sector. In this context, the experts appreciated Moldova’s progress in adopting important legislative acts for public health, making reference including to the package of anti-tobacco laws.

The Prime Minister said that the expertise and assistance provided by development partners, including of the World Bank, was extremely important to successfully  achieve the goals in the health system of Moldova. Pavel Filip gave assurances that the Cabinet would give priority to this sector, and the governmental team would get involved as actively as possible in the promotion of reforms necessary, to have a modernized and efficient health system, in the service of the public interest.