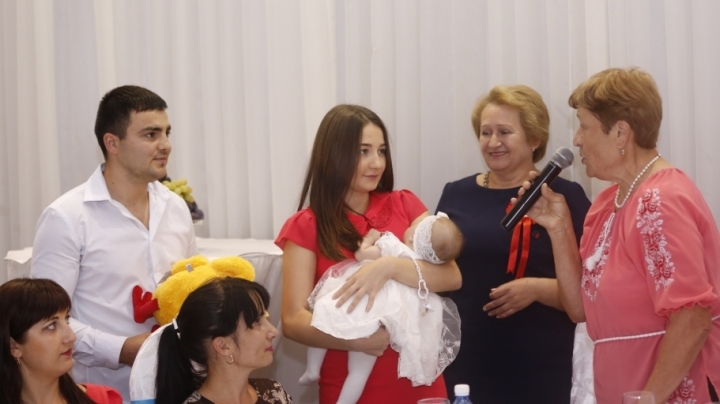 The Women’s organization from within the Democratic Party has launched “The Academy of the Young Family”, a project which foresees the offering of psychological assistance and help in the professional training of young people who started a family. The event took place in Balti and gathered over 60 families from 9 districts of the northern part of the country.

The author of the project says that the project has the objective not only to help the young families, but also to promote the values of the family.

“We are talking about the training, education, professional training, psychological counseling, promotion of beautiful and successful models of some families. We will be a partner of the state so that the family in Moldova will be a strong one” declared the president of the Women’s organization of the Democratic Party, Valentina Buliga.

Aurel and Anastasia Bejereanu formed a family one year ago. They say that this kind of projects will help them overpass their problems much easier:

“I think that it is very important, young people need information. In many cases the youngsters do not have the support of some people, even the close ones.”

The secrets of a long-lasting marriage are known best by the couples who reached the gold anniversary.

“We will give some advice to young couples, to avoid violence in the family, to love themselves, to respect themselves” said Nicolae Odajiu, resident of Fundurii Vechi village, Glodeni district.

The specialists say that more and more couples are requesting the help of a psychologist in order to overpass the crisis situations, but not all of them can benefit from counseling.

“I am the only specialist who can offer psychological counseling in Sangerei district” declared Aliona Ivancenco, psychologist in Sangerei.

The authorities prompt other structures to get involved.

“We need consolidation programs of the parental competences, we need training programs for various groups of parents, because we have parents who never had the experience of a family, have spent their childhood in boarding houses” declared the Minister of Labor, Social Protection and Family, Stela Grigoras.

At the event was also present the president of the Democratic Party, Marian Lupu, who declare that the family had a huge role in the wellbeing of the country.

“The Democratic Party is the only political party from the country which put family into the center of attention, and all policies promoted until now and which will promoted in the future are seen through the interest of family” said Marian Lupu.

In the framework of the project “Academy of the Young Family” will be opened many centers of information for youngsters.