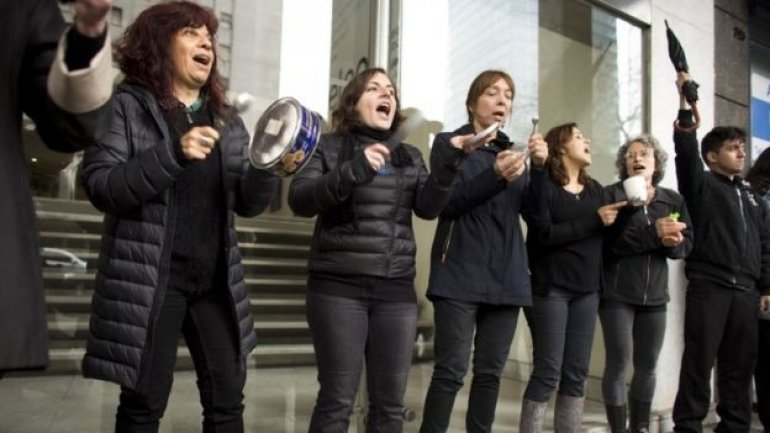 Thousands of people wearing black clothes braved the torrential rain in Buenos Aires to protest the rape and killing of a 16-year-old girl in Argentina, reports CNN.

Protesters called it Black Wednesday, and turned it into a day to demand an end to violence against women nationwide.

Lucia Perez was abducted outside her school in Mar del Plata on October 8. She was drugged, repeatedly raped and sodomized with an "unspecified object" so violently that she eventually bled out from her internal injuries.

Three suspects have been arrested and are still in custody.

The prosecutor on the case, María Isabel Sánchez, told Telam news agency that the assailants washed her body and cleaned her clothing before dropping her off at a local clinic - and running away.

Demonstrations were held in 80 cities in Argentina, and 58 others worldwide joined in, according to the state-run news agency.

In Madrid, women chanted "We're not crazy, we're not afraid - we're fed up!"

Perez's story has brought attention to violence against women in Latin America. Under the hashtag #NiUnaMenos, or "not one less," and #VivasNosQueremos, or "we want to live," posts on social media from all over the world show women and men standing in solidarity with the horrors that the teenager and her family went through.

"I would have liked to publish along with this letter a photo of me laughing with my sister. Or a photo of her, hugging my parents. But no, we can't ... because while we try to process that she was killed the way she was, we have to process the death threats that fall on all of us," the letter reads.

"This time, gender violence touched Lucia, but the next time it could be you, or the person you love most in this world. We have to be strong and get out into the street, scream all together, now more than ever: not one less."

UNICEF Argentina posted a series of tweets on the incident.

"All women, including girls and teenagers, have the right to a life free of violence #notoneless," the UN children's agency said in one of its tweets.
AFLĂ imediat Știrile Publika.MD. Intră pe Telegram