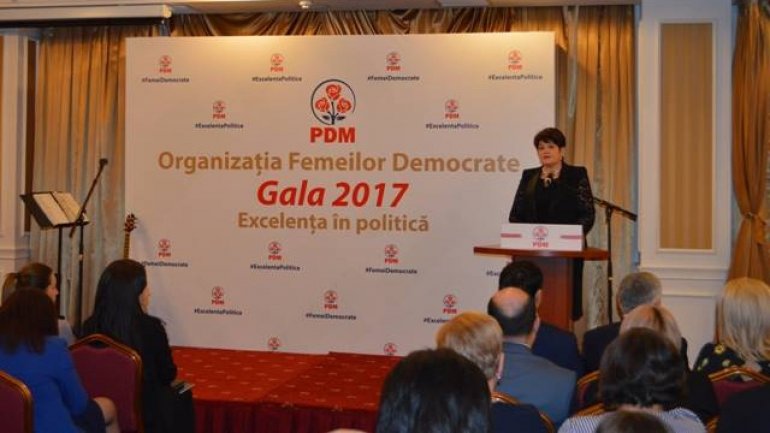 Women from the Democratic Party of Moldova were appreciated within the first edition of "Rose Gale - Excellency in Politics". The event was organized by the president of PDM's Women Organization, Valentina Buliga, who wished to encourage professionalism, experience and results gained by the women from the party.

The first edition offered 25 awards for women who participated in charities, promoted the party and have realized social projects in their regions.

"Democratic women have still much to say, it is a big stimulant for us, who are attending this Gale, to know that someone appreciates our work and the efforts we made" president of Democrat Women Organization from Bălţi, Cecilia Graur declared.

"It pleased me greatly being informed of this event and of president Buliga's initiative. We feel indebted to increase our performance, attitude and responsibility" president of Făleşti branch, Iraida Bânzari said.

The women's successes were also appreciated by their male colleagues.

"All women are strong, well organized and without a doubt members of the Democratic Party" president of PDM Youth Organization, Alexandru Cauia expressed.

"Everything a woman touches grows well. They must hear prises and be appreciated by men" president of PDM organization from Anenii Noi, Sergiu Rapcea said.

Democratic Party of Moldova has over 26 000 members. The party's leaders claim that this event's purpose is to motivate women to be more active in the political life of Moldova.

"Rose Gale - Excellency in Politics" will have 3 editions. The other two will take place in September 2018 and February 2019. The awards will be given based on an evaluation made by the Coordinating Council of Women Organization.

"It is a boost for all democratic women to unite and mobilize for the realization of many obligations. Economically empowered woman, sustained woman, promoted woman, woman with equal chances and opportunities" President of PDM Women Organization, Valentina Buliga declared.

The event will end with a concert.