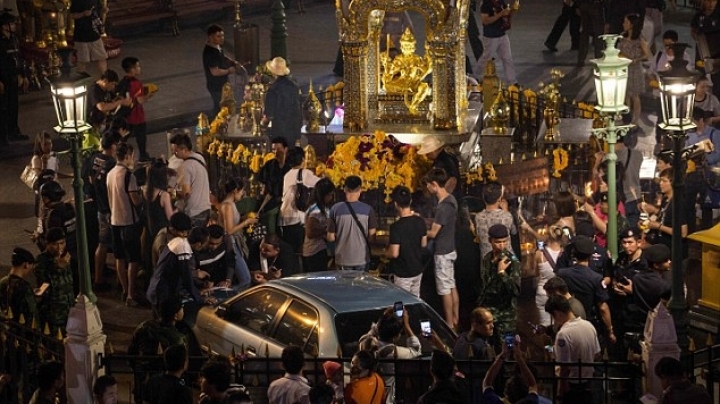 This heartstopping footage shows the moment a car crashed through gates and into a a crowd of people who were visiting a popular shrine, reports Daily Mail.

Six people were injured after a woman suffered a stroke at the wheel and crashed the vehicle into the Erawan Shrine in Bangkok.

The light blue sedan veered off a major road in the heart of the capital and slammed through a gate onto the grounds of the shrine, the Hindu site of a bombing in August 2015 that left 20 dead and scores injured.

Footage was captured from the incident that shows the vehicle approaching the shrine, crashing through the gate, and then ploughing into crowds of people.

Police Lt. Gen. Sanit Mahathavorn, acting chief of the Bangkok metropolitan bureau, says the incident late Friday was caused by the driver who suffered a stroke and lost control.

The driver has been hospitalized. Her daughter was also in the car, but her condition is not known.

The Bangkok Post daily says the injured include several tourists from Indonesia, Singapore and China.

The shrine, a popular stop for East Asian tourists, was thronged with worshippers at the time of the accident, according to an AFP reporter at the scene.