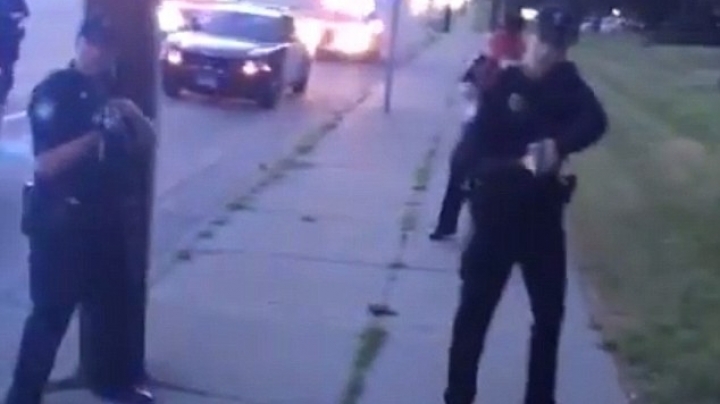 Hundreds of people have descended on the Governor of Minnesota's house at 3am to protest the police shooting of an Afro-American man after his girlfriend live-streamed his death on Facebook, reports Daily Mail.

The shocking footage of the aftermath of the police shooting in Falcon Heights, St. Paul, Minnesota, went viral on Wednesday night.

In the video, Lavish Reynolds tells viewers that she and her boyfriend, Philando Castile, 32, were pulled over for a busted tail light by a police officer.

She claims the cop, who has since been put on administrative leave, asked Castile, a cafeteria supervisor at a school in St Paul, to show his license, but then shot him four times while he reached for it. As she talks, she moves the camera across to show Castile, bloody and losing consciousness, and the cop - still pointing his gun.

Crowds of protesters turned up outside Governor Mark Dayton's residence in Saint Paul demanding for him to 'wake up' and speak to them. Members of the group also took the yellow police tape from the crime scene and decorated the governor's house with it.

They shouted 'no Justice, no Peace' and video shows them chanting Philando Castile's name over and over in a moving show of unity.

A man outside the governor's house said on Twitter: 'We're protesting at the governors mansion. The police sent two delegates to make peace. They brought their guns.'

The protesters earlier formed at the scene where Castile was shot. The crowd was heard chanting 'we will stand our ground. We will not move' as an officer tried to clear the area, KARE-TV reports. Crowds have also gathered outside the hospital where Castile died.

In the shocking video, Castile is at first still conscious and intermittently swearing, while his head lolls around. The officer keeps his gun trained on the man.

Reynolds says to her Facebook viewers that Castile was licensed to carry a weapon and told the officer he had a firearm as he reached for his wallet and ID.

'And the officer just shot him in his arm,' she says.

'Ma'am, keep your hands where they are,' the cop says, sounding panicked. He then appears to shout 'F***!'

'He just shot his arm off,' says Reynolds, maintaining her calm.

'I told him not to reach for it!' the cop screams, sounding close to tears. 'I told him to get his hand open.'

The cop tells her to keep her hands 'where they are, please' and she agrees, but then goes back to chanting about her boyfriend's possible death. 'Please don't tell me this Lord, please Jesus don't tell me that he's gone.'

At that moment, other officers are heard telling Reynolds to exit the car and walk backwards towards her. She asks if they have her daughter. In the distance a girl can be heard crying.

They tell her to get on her knees while they cuff her. For the next few minutes all that can be seen is a clear blue sky.

Other videos shared on Twitter by one user show cops performing CPR on a prone figure - presumably Castile - and later putting up crime scene tape.

At this point in Reynolds's video, a man who sounds like the first officer can be heard shouting 'F***' at several points afterward, and Reynolds is heard in the distance telling cops how the cop 'started shooting.'

She then begins wailing about how Castile is a 'good man' who 'works for St Paul Public Schools... He’s never been in jail, anything. He’s not a gang member, anything.'

Her four-year-old daughter is heard telling an officer she wants to collect her mommy's purse.

Shortly afterward, the video cuts to Reynolds, sitting in a police cruiser - handcuffed, she says - with her daughter.

She repeats her story and begs anyone watching to come help her at the corner of Larpenteur Avenue and Fry Street.

The camera moves over to her daughter for a moment; the girl looks sad and confused.

Finally, Reynolds - who has mostly kept it together throughout the incident - breaks down.

Sgt. Jon Mangseth, interim chief of St. Anthony Police Department told the paper that the Minnesota Bureau of Criminal Apprehension has been called in to investigate.

The video had received more than 1.5million views in the four hours after it went live - and attracted a stream of horrified and angry comments.

The video disappeared for around an hour after it was put up, causing angry accusations of censorship, but then returned with a 'graphic content' warning.

Reynolds's entire Facebook profile also went down for the duration before returning.

The shooting comes just days after another young black man was shot dead by police after they received a complaint about a man making threats with a gun while selling CDs outside a store in Baton Rouge, Louisiana.