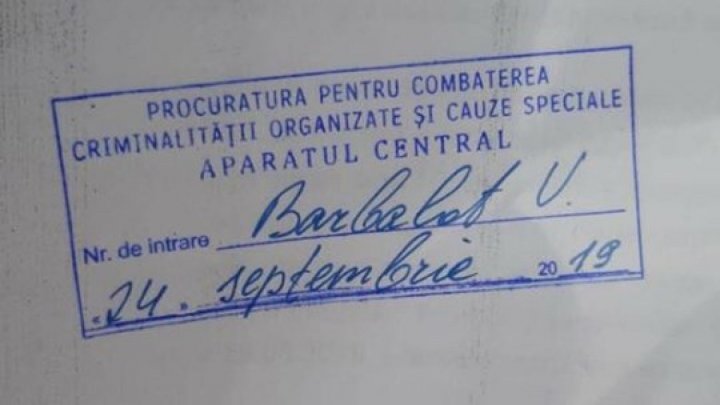 The current government through General Prosecutor's Office wants to influence the testimony of a witness in the file of attempt to murder former Democratic Party President Vlad Plahotniuc, writes 24h.md.

According to the source, one of the key witnesses in this file is under pressure to change testimony and to declare in stead that it was set up.

In a anonymous letter, it is mentioned that the person, an Ukraine citizen, takes part in the witness protection program (since 2017). It's Ion Olaru, the acting chief of Directorate 6 of Internal Affairs Ministry for the Protection of Witness, who tries to influence this person.

This Ukraine citizen filed a complaint to Prosecutor's Office for Combating Organized Crime and Special Cases (PCCOCS). He explained the discussion with Ion Olaru. The person also sent a record of that discussion at an apartment.

According to the statement sent to PCCOCS, they had the first contact on September 11, 2019 and the witnesses were two policemen who ensured the personal security for this witness.

Olaru reminded the fact that this person is under search of Czech Republic and would be invited to general prosecutor's office for a discussion about the file of assassination attempt on Vlad Plahotniuc.

The source also mentions that Ion Olaru contacted by phone the witness on September 18 and asked this person to keep in touch because they would go together to the General Prosecutor's Office.

At 13:00 the same day, Olaru called this person again to make an appointment at this person's rented apartment.

The witness decided to record the discussion, using two phones at the same time.

As the record shows, Ion Olaru tried to convince this person by different arguments that after the change of police leadership, the file of assassination attempt on Vlad Plahotniuc would be reviewed.

Olaru said that, based on the complaint the witness was to write to initiate lawsuit against prosecutors who investigated this case. Several individuals were convicted based on this legal decision. Some of them were close to the criminal group Grigore Karamalak, Bulgaru.

Although he was aware of the chance to be recorded, he tried to indicate the witness to declare the attempt to murder was a setup. He said "where it's true, where it's not really true".

The witness insisted that everything he said previously and in the file is exactly true, that was not under any pressure.

Olaru tried to convince this witness some of the those convicted in this file could have had new testimony. He sent a testimony of Iuri Parhomenko, who was convicted for 5 years and 4 months and changed testimony.

In the statement sent to PCCOCS, the witness requested personal security for this person and for his daughter who lives with him. He also emphasized the measures taken regarding the pressure of Ion Olaru. According to this witness, he could be a part of the criminal group which wants to cancel the conviction decisions in the file.

At the same time, 24h.md also writes that the Moldovan authorities are fulfilling an order from Moscow, more precisely, by persons from the Federal Security Bureau (FSB), at the direct intervention of Grigore Karamalak and Veaceslav Platon.

It is hoped that the intention of murdering Plahotniuc in 2017 will end. The sources also informed for 24h.md, Bulgaru și Platon paid persons in the Directorate 6 of Ministry a million dollars to change the file of assassination attempt on the former democratic leader.

The information is not verified and received from an anonymous unknown source.