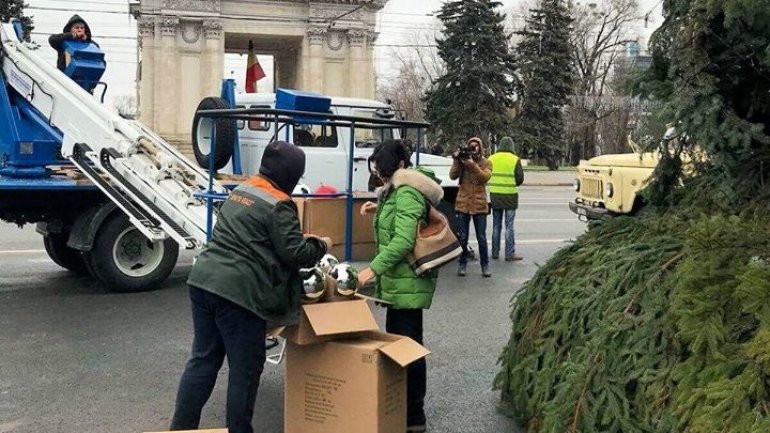 Winter vacation vibe covers the city. The Christmas tree in the Great National Assembly Square is adorned with hundreds of globes and lights. The inauguration of ceremony will be held on Monday.

The red and silver globes were brought from Germany and are being installed before the official inauguration of vacation.

Interim Mayor Silvia Radu was in the inspection to see how the works were going. The official claims that money for fir will be donated for charitable purposes.

"We made an agreement, 10 thousand lei will be donated to needy children or to people with special needs. We will buy gifts for children, I think it will be the most beautiful gesture", the interim mayor of The capital, Silvia Radu.

The passers-by are already admiring the fir tree in the city center.

"It's thicker than last year, it's more beautiful."

"It's nicer than last year tree."

Decoration of the Christmas tree began on Saturday night when the workers installed the lights.

The first Christmas tree that was brought from Ukraine came to Chisinau damaged. Because of this, the municipality had to cut another tree as a matter of urgency.

Spruce is 50 years old and grew up in the yard of a former kindergarten in the capital. The land on which the tree was cut was privatized by a foreign citizen several years ago.