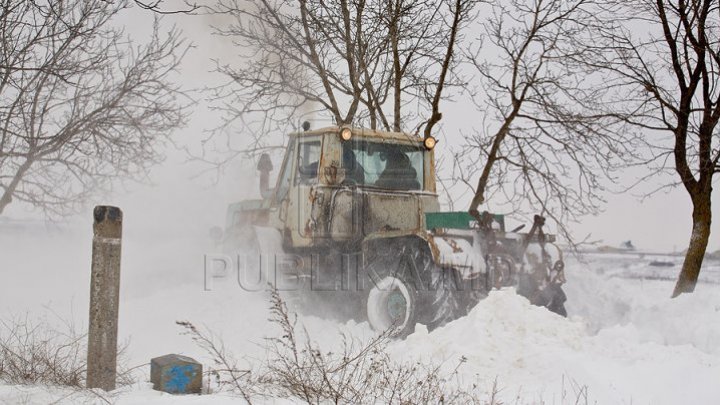 (UPDATE 17:43) According to border police, all the border crossing points with Ukraine and with Romania are working normally, weather conditions have not influenced their activity in any way.

However, border police recommend drivers not to go a long way, especially if the vehicle is not equipped according to weather conditions, warnings are put in place, and there are possibilities for some parts of the road to be closed.

(UPDATE 16:09) According to many drivers, the road going to Căuşeni is blocked. In Ciobanovca village, many vehicles were snowed in. Drivers urge others to stay home.

(UPDATE 15:57) Due to the bad weather, Minister of Internal Affairs, Alexandru Jizdan, will go on the field to inspect how the roads are being cleaned, as well as to see if officers are encountering any issues in roads cleaning operations.

According to the police, the following roads were closed off for trucks:

At the same time, according to representatives from General Inspectorate for Emergency Situations, due to the heavy snow, routes that are considered to pose a threat are being monitored by three groups, namely: Chișinău –Anenii Noi – Ștefan Vodă, Chișinău – Hâncești – Leova – Cantemir - Cahul, Chișinău – Cimișlia – Comrat.

Snow removal is being performed by 79 vehicles and 92 workers. In the past few hours, rescuers and firefighters assisted 3 cars that encountered issues due to the snow. The incidents took place on routes Vulcănești – Burlăceni, Bulboaca, Anenii Noi district, Fundul Galbenii Hâncești district.

According to meteorologists, tomorrow will be met with cloudy sky and snow flurry. In the following days, weather will slowly warm up. In the Capital, on Sunday will register +3 °C, while on Monday +6 °C. By the end of next week, temperatures will rise to +15 °C.