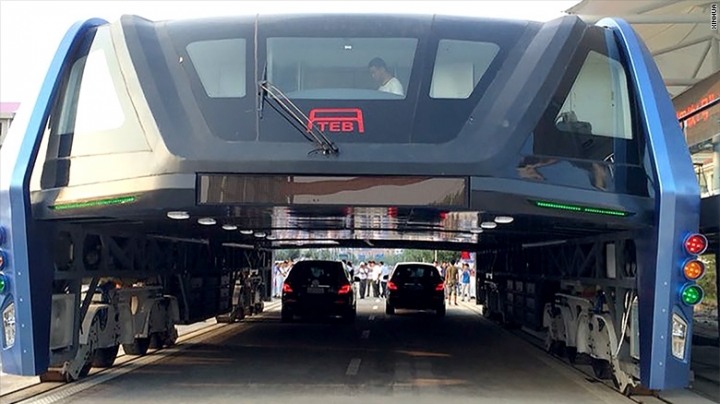 The test run of a futuristic elevated bus cruising over the top of cars in China has generated a lot of buzz. But can it really work?

Experts say the massive vehicle faces a raft of challenges, and even if they're overcome it will be many years before any of the country's congested cities adopts the new transportation system, CNN reports.

"This is a unique idea to encourage people to improve the quality of transportation," said Daizong Liu, China transport program director at the World Resources Institute. "But there are many related concerns."

"Safety is the most important," he said. "How would cars drive and turn under the bus? If there is an accident, how would you move passengers and vehicles out from underneath?"

The technology exists, but experts say fitting such a giant contraption into the urban environment will be tough.
It might mean demolishing old buildings and felling trees in order to lay down track for the vehicle, Liu said. That could make it "more suitable for a newer city that is in the early stages of planning," he added.

The bus stands 4.8 meters high so that cars have room to drive underneath. The current height limit on Chinese roads is 4.5 meters (15 feet), according to state media. And with hundreds of passengers traveling on top, it could be too heavy for the roads.

That idea faded into history. And the jury is still out on whether any city will get its own elevated bus.

"It's a bit early to say if something like this has the chance of being successful," said Scott Cain, chief business officer of Future Cities Catapult, a U.K. network aimed at developing new products and services. "But given the amount of lost productivity and personal frustration from time spent in traffic jams, it's an agenda that city governments and private firms are looking at."