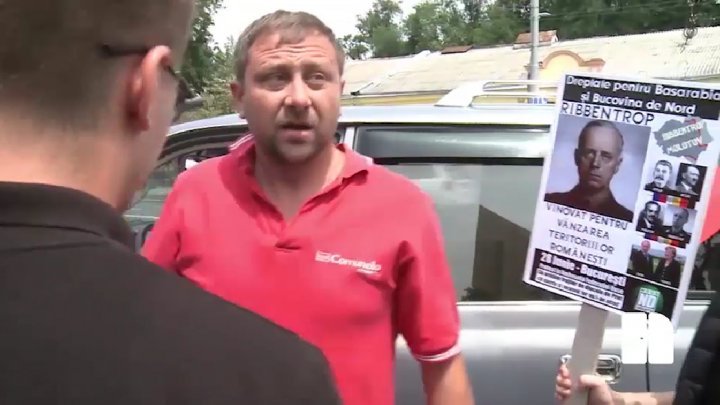 Protest with fights in front of the Russian Embassy in Chisinau. Unionists have commemorated 78 years since the Soviet occupation of Bessarabia and Northern Bukovina. Their actions turned into a bloody protest after a citizen displeased by the unionists action, having decided to pick a fight.

Two organizations that promote the union gathered to recall the historical events when the Soviet army occupied Bessarabia and Northern Bukovina.

"We want to show who is guilty of the drama that Bassarabia goes through until today, and the guilty people are Ribbentrop, Molotov, Stalin," said Alexandru Burca, a member of the New Right Association.

"We are not against Russia, we know Russian language, we respect the Russian culture, we want to have good social, economic, political relations of any kind, but we can not accept the occupation army on our territory," said Vlad Bileţchi, president of UNIREA -UDIP.

Soon, the place of the peaceful chants became violent. A man who parked his car in front of the Embassy hit the organizers of the event.

The police then tried to calm him down. The aggressor didn't explain why he wanted to stop the protest.

"I did not hit him without reason. I argued that results of the union in Chisinau City Hall belong to Dorin Chirtoacă. We don't have industry, engineers, but they show me only protest", explained the aggressor Veaceslav Plămădeală.

He is an entrepreneur from Chisinau who entered his car to the Architecture Department of the Capital in 2015.

The press writes that Plămădeală participates in the protests in support of Andrei Năstase and was recently detained in the Great National Assembly Square because he intentionally blocked the protest by car.

Subsequently, the aggressor was taken to the police.