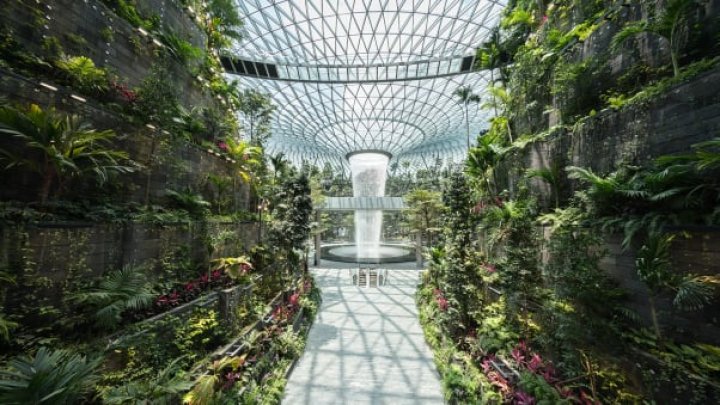 Following four years of construction and nonstop media coverage, Singapore'slong-awaited Jewel Changi Airport is officially open, reports cnn.com.
Featuring a dramatic, doughnut-shaped exterior framed in steel and glass, the 135,700-square-meter space (around 1.46 million square feet) is a multi-use complex designed to connect three of Changi Airport's four terminals.
But above all, the April 17 opening confirms long-held suspicions that yes, the "world's best airport" is now even better and will likely hold onto its top spot on the Skytrax rankings, which it has dominated for the past seven years, for the foreseeable future.
Built at a cost of SG$1.7 billion (about US$1.25 billion) and designed by renowned architect Moshe Safdie, Jewel has 10 stories -- five above ground and five in the basement.
The star attraction is the 40-meter-tall (around 130 feet) HSBC Rain Vortex, which cascades through a huge oculus in the middle of Jewel and is billed as the world's tallest indoor waterfall.
It's a dramatic site that's usually heard before it's seen as passengers exit the retail and dining zones that wrap around the Jewel's outer sections and head toward the center, where they're met with the thunderous sounds of a waterfall that appears to fall from the sky.

What exactly is the Jewel?

Containing over 280 retail and food/beverage outlets, Jewel Changi Airport could easily be written off as a beautiful shopping mall filled with dramatic green spaces that just happens to be connected to an airport.
After all, it's not an airport terminal -- there are no boarding gates or arrival halls, and anyone can visit.
But the new Changi addition serves multiple purposes for travelers. In addition to linking Terminals 1, 2 and 3 (passengers heading to and from Terminal 4 need to take a shuttle bus), offerings include early check-in services and baggage storage facilities as well as a 130-cabin YOTELAIR Singapore Changi Airport hotel.
There's also the Changi Lounge, designed to complement a new intermodal transfer service that improves air-sea connectivity for cruise passengers.
Beyond expected amenities like free Wifi, Jewel offers a few little nice touches like power bank loans -- free for 12 hours.
There are plenty of diversions for travelers stuck in Changi on a long layover, too, including an 11-cinema IMAX theater.
Jewel's Shiseido Forest Valley is a four-story garden filled with walking trails set amid more than 235,000 square feet of landscaping, all surrounding the Vortex waterfall.
"Rainwater is collected and it becomes a part of the Vortex as well," Jayson Goh, managing director for airport operations management of Changi Airport Group, tells CNN Travel.
"We can actually control the volume of flow. Below the Vortex we have tanks to collect the rainwater so that we can recycle it. When there's an excess of rainwater, it can be used for irrigation of the plants in the Forest Valley."
AFLĂ imediat Știrile Publika.MD. Intră pe Telegram