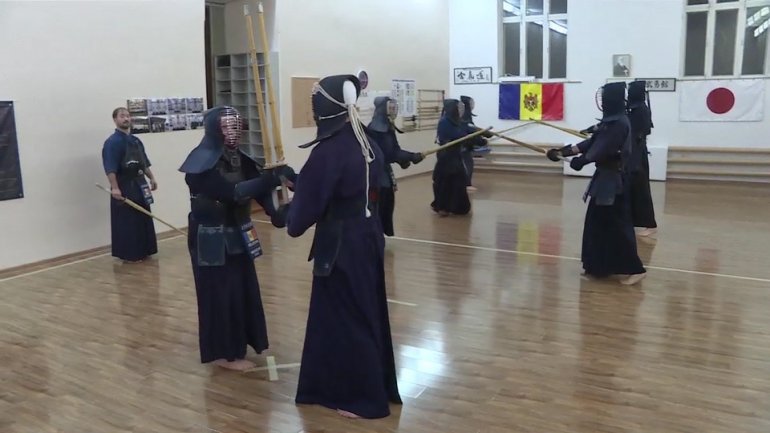 Kendo is a modern Japanese martial art, which descended from swordsmanship. Its roots are going back to 1 300 years ago. Despite their origins being deeply embedded within the Japanese culture, Kendo reached Republic of Moldova in the middle of 90s.

At the moment, the Kendo club has a few dozens of members.

"Different people come here. For example, there are students and even businessmen. In Japan, this sport is considered elite and is practiced by CEOs and deputies. Kendo helps people tire emotionally and prepare physically. Kendo requires much physical effort" president of the Kendo club, Vitalie Oncea said.

Still, few knows how training works. Everything begins with an old ritual. First of all, sportsmen are cleaning the floor.

Equipment is an obligatory accessory in Kendo. Moreover, respecting the ritual of equipment is the first step to success.

Kendo is practiced by wearing traditional Japanese clothes and protection armor (bōgu). While bamboo swords (shinai) are used as weapons. All the equipment wights no less than 10 kg, while its price is of around 200 US dollars. After all the traditions are respected, the training itself begins.

"At the first medieval festival I saw them performing. I said wow! I was amazed that we have something like this in Moldova. Then I discovered the boys. First of all there are swords and something Japanese. Different from our own culture. It is something that you do not meet often here" marketing expert Irina Medveţchi said.

"If we speak of business, I can say that by practicing Kendo you learn to take correct decisions and in time. It is a fight against phobias" economist Andrian Ulinici said.

The national team is enjoying success on the international field in the past few years. Our team has managed to gain formidable performance in their debut in the European Championship in 2016.

In the whole world, the number of people practicing Kendo is estimated to be 8 million people, among whom 7 million are from Japan.

In Japan this matial art is the most popular and is taught in higher education institutions.