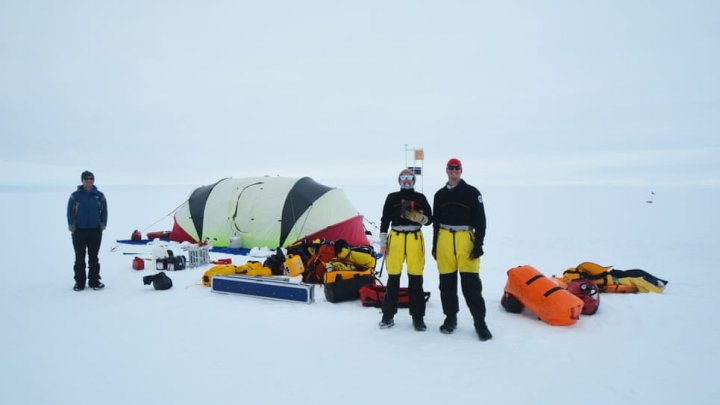 Antarctic scientists, avalanche specialists, Alaskan farmers and an industrial deep-freeze manager… Candice Pires, from The Guardian, talks to few people who have to endure extreme cold to do their job

I’m about to go on my third research trip to Antarctica. For my first, we flew in from New Zealand to our base. From the air it’s just blue and white: icebergs and sea ice, and valleys full of high-glaciated mountains. You don’t see any wildlife and even seeing exposed rock is a rarity. It’s stunning. The runway at the research base is ice, no tarmac. Stepping off the plane, the air is so cold and dry (it’s often around -25C) that it instantly sucks the moisture out of everything. It can be hard to breathe.
I’m doing a PhD looking at how the oceans are melting Antarctic ice shelves. An ice shelf is like a cork in a bottle – if you pull out the cork, grounded ice starts to flow more rapidly into the ocean. The work I’m doing is measuring the Totten Glacier, which is in quite a vulnerable region.

We go in the summer months – December and January. There’s daylight 24 hours a day. For maybe an hour the sun dips below the horizon and it gets a little dusky. The research base is a small, closed community of scientists and base staff. I struggle with the danger of the cold and that it keeps you confined to the base a lot of the time. If you want to get out and have time on your own, you have to jump through a lot of hoops. With the remote location, I find the loss of personal freedom hard. I miss feeling in control of my own life.

I work in a team of four and our trips are 10 weeks long. We are flown to the glacier. The first time we got dropped off, and the helicopter flew away, I was overwhelmed to be in such an isolated place. I felt like a tiny person in a huge expanse and it was quiet, quiet, quiet like you couldn’t believe. It was emotionally intense.

Our priority is to find six equipment towers in the snow that were placed on the glacier the previous year. They’re light aluminium frames that house our monitoring equipment. Year to year the towers move up to 1km due to the flow of the glacier. We only have the last known GPS positions to try to locate them.

The biggest challenge is keeping my hands warm, because I need good dexterity. I work with them bare and then ball them up quickly in big mittens. I don’t use gloves, because as soon as my fingers are separate they’re gone. I’m also never without my Thermos.

I quite happily immerse myself in my new little community and don’t miss my friends and family too much. But when I return to Hobart I’m happy to no longer have to always tell someone where I’m going, or have to take someone else along with me. 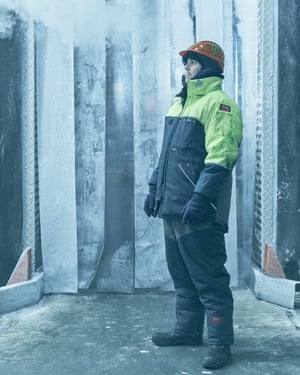 There are three doors to get into the freezer. They’re sealed and air-locked to keep the cold in. When you enter, you get a big waft of cold air in your face. The temperature’s between -18C and -25C. But if you’re working at the back when the fans kick in, it feels like -30C. Sometimes you find snowflakes hanging about.

If I’m doing a morning shift I get up at 4am, but I have to be quiet as I have a missus and three children. I’ll put on my thermal socks, thermal vest, T-shirt, sweatshirt and jacket. And then a woolly jacket. When I get to work I put on a pair of overalls, a freezer jacket, freezer boots and woolly hat. Over that I wear a hard hat that has a neck wrap and ear muffs. The warehouse is quite dark, like a cave. It’s filled with long aisles and pallets stacked high. We mainly store meat: there’s beef, lamb, chicken and turkeys for Christmas. It comes from all over: Spain, Italy, Brazil. Tesco stores salmon here, also Greggs, Wetherspoon’s. We have other bits and bobs, too. Last year we had big ice sculptures and ice glasses for an ice bar in London, and we’ve had ice samples from the Antarctic for scientists.

After about half an hour my goatee starts to frost up. After two hours I look like Santa Claus. My beard goes hard and when I breathe I feel it melt and run, and then it’ll refreeze. Sometimes my lips get stuck together.

The summer months are the weirdest, because first you come out of the warehouse and get blinded by the sun and then after a few minutes of warming up you start sweating, so you take all your gear off. When I leave, I stay away from heat to let my fingers defrost by themselves, otherwise you get a horrible burning feeling.

I’ve done this job for five years and I enjoy it. The day goes fast, as there’s so much to do. I started as a warehouse operative and worked my way up. I now introduce new staff to the freezer. After 20 minutes some will say: “Nah, not for me, far too cold.” The more you think about it, the more you get cold. If you just focus on the job, you crack on and get it done. 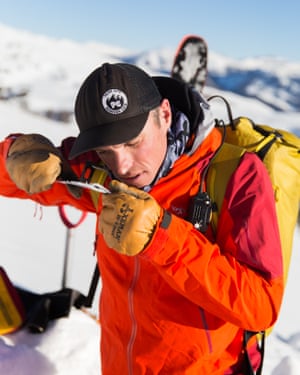 I experienced hypothermia while working once. In 2005 I was in Vail, Colorado, and was standing on a ridgeline for more than an hour in 60mph winds that created a -40C wind-chill zone. It was the day after a big storm and the visibility was low. It’s an understatement to say I felt cold. It was awful. It became difficult to move. When your body temperature drops below a certain point, blood stops being sent to your appendages in an effort to keep your brain warm. I stopped shivering. My hands and feet felt like ice blocks.

I’ve been working in snow safety for 16 years. I’m trained to forecast, avoid and mitigate avalanches and to educate the public on them. On a morning with new snow, I go with a team up to ski areas and we plan out and cause controlled avalanches while the area is closed. We use our knowledge of the terrain and watch weather patterns, because that drives everything. For example, winds can transport snow to a sheltered slope and force the top layer of snow grains together, creating a hard slab to form over soft, older snow. The effect is like putting a textbook on top of potato chips; it becomes vulnerable to collapse. To make areas like that safe, we throw 2lb hand explosives into the snow to create pressure that can trigger an avalanche. Our work makes the danger of avalanches to the public minimal. But to us it can still be very real.

On that morning in 2005 it was all well planned, as it always is – multiple teams working their way down the ridgeline, coordinating on radio so we don’t get underneath somebody who’s about to create an avalanche. But small delays here and there, and the next thing we knew, my route partner and I were standing out for longer than we should have been. Our supervisor, Colin, had skied down to a safe spot about 500ft below us to assess the conditions in the bowl. We told him we had one explosive left, and, to avoid the hazard of taking it back to our cache, he told us to throw it. We threw it into the bowl where we’d already put multiple charges, but it created an unexpected mid-size avalanche above where Colin was standing. The avalanche was large enough to bury people and trees.

It must have taken between 10 to 15 seconds for the avalanche to run its path and the powder cloud to settle. I was looking down and knew something wasn’t right, but my brain was working so slowly I couldn’t tell what it was. We tried to call Colin, but he didn’t respond. I wasn’t panicking, because I couldn’t think properly. The powder cloud following the avalanche had knocked Colin off his feet and he had nearly been buried. Luckily the debris flow missed him and he was OK. Not being able to think during something so dangerous was a strange sensation.

The job involves a lot of standing around in snow. We also forecast for avalanches by digging deep pits that we climb into and analyse the stratigraphy, which are the layers of snow caused by different weather. The avalanche danger can be determined by studying the layers and how they relate to each other.

I’ve found it’s always better to carry more layers than you think you’re going to need – the extra weight is worth it. And I always tell people to wear warmer gloves than they think they need, too. When I really feel it, push-ups are my go-to to get the blood flowing.

I grew up in Texas, where everything is unbearably hot. I remember being eight and riding to a friend’s house on summer break and thinking my brain was melting. Maybe, subconsciously, that’s why I ended up doing this work.