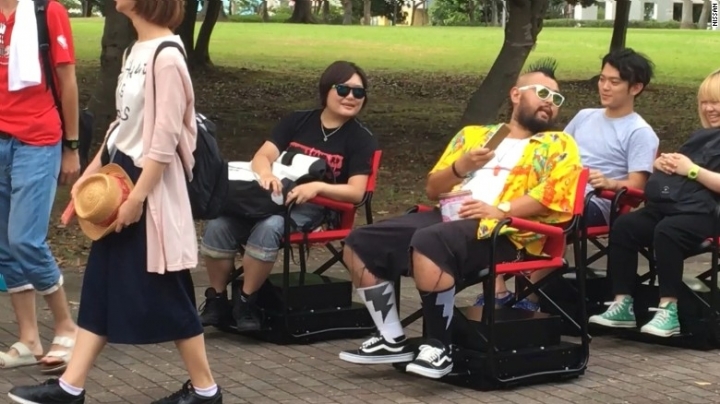 Too lazy to stand in line outside your favorite restaurant? Japanese carmaker Nissan thinks it has the solution.

Enter the ProPilot Chair, a fleet of self-driving seats equipped with sensors that allow each chair to detect and follow the one in front of it. The empty chair in pole position automatically glides back to the end of the line, CNN reports.

This lazy person's dream might sound like a gimmick, but Nissan spokesperson Nicholas Maxfield says the technology is based on the same system that's currently available in the Serena minivan.

"The chairs won't take off on their own and take you to the cinema, but they do represent how the Serena minivan works," he said.

Nissan has big plans to upgrade its autonomous vehicles by 2020 so that they can navigate crowded city centers.

The chairs are a gentle way of introducing the technology to the general public, according to Maxfield. They're also proving to be a handy marketing stunt.

Six chairs are currently on show at Nissan's public gallery in Yokohama, Japan. They will also be trialled in front of select restaurants in the country from 2017.

Any decision to roll them out further would depend on the public's response, Maxfield said.

This isn't the first time that Nissan has experimented with intelligent seats. Back in February, the company developed office chairs based on their autonomous parking technology.