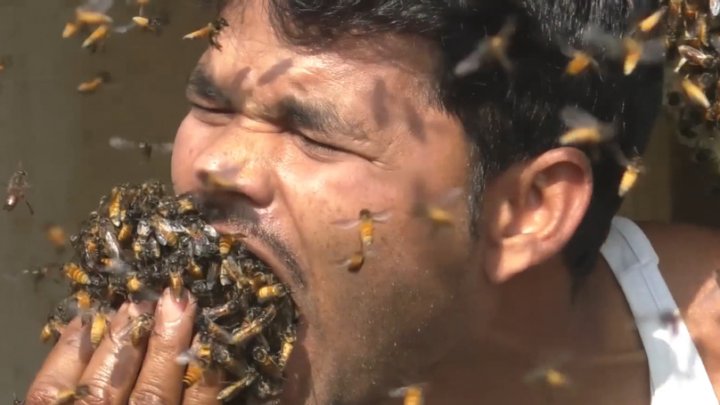 This is the startling moment that an Indian honey collector with no protective clothing stuffs bees into his mouth.

He starts by putting his head through a hole in a hanging piece of bee-covered honey comb and then coolly takes a handful of the insects and stuffs them in his mouth.

Mr Dalal, who said he has become immune to bee stings, uses his fingers to push the bees further into his mouth, his face screwed up in concentration.

Even though his mouth is bulging with the number of bees in his mouth, he then grabs another handful from the honeycomb and finds space to push them in too.

After letting the bees sit in his mouth for several seconds, Mr Dalal then spits them out and cuts a portion of the hanging honeycomb away so that he can put droop the rest over his neck

Amazingly, he takes things one step further by grabbing further handfuls of the hanging bees and dropping them down the front of his vest.

Before taking up his present job, Mr Dalal worked as a doctor's assistant in Kolkata, the state capital.

He said, 'Since I live in a village, I would often come across honeycombs containing good amount of honey.

One day while walking past, I thought what if I start collecting honey and sell them, I could easily make a living out of it. That is how it started.'