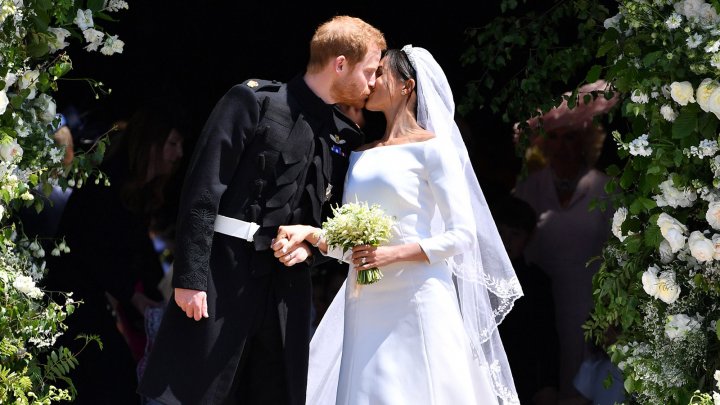 foto: Prince Harry and Meghan Markle kiss on the steps of St. George's Chapel shortly after being married on Saturday. It was their first kiss as husband and wife. Ben Stansall/Pool/AFP/Getty Images
AFLĂ imediat Știrile Publika.MD. Intră pe Telegram

The Royal Family has thanked those who travelled to Windsor for the wedding of Prince Harry and Meghan Markle, writes BBC.

Thousands of people lined the streets to see the couple on their big day, with many more watching the ceremony on television around the globe.

The wedding celebrations ended with a black-tie dinner and fireworks display at Frogmore House, near Windsor Castle.

More than 13 million people watched the TV coverage on the BBC - it peaked at 13.1 million just after 13:00 BST, with an average of 8.7 million viewers.

As a wedding gift Prince Harry gave his bride an emerald-cut aquamarine ring which had belonged to his late mother - Diana, Princess of Wales.

The Royal Family's twitter account posted a message of thanks to those who followed the wedding from the UK, the Commonwealth and around the world.

The newlyweds - now to be known as the Duke and Duchess of Sussex - spent the night at Windsor Castle.

The couple are not expected to leave for their honeymoon immediately, choosing instead to remain in the UK before taking a break.

Their first official engagement as husband and wife will be at an event to celebrate Prince Charles's 70th birthday at Buckingham Palace on Tuesday.

Earlier, the prince and his bride exchanged vows and rings before the Queen and 600 guests at St George's Chapel, Windsor Castle.

Ms Markle wore a white boat-neck dress by British designer Clare Waight Keller and Prince Harry was given special permission from the Queen to keep his short beard while wearing the frockcoat uniform of his former regiment, the Blues and Royals.

Large crowds turned out in bright sunshine to see them driven around Windsor afterwards in a horse-drawn carriage.