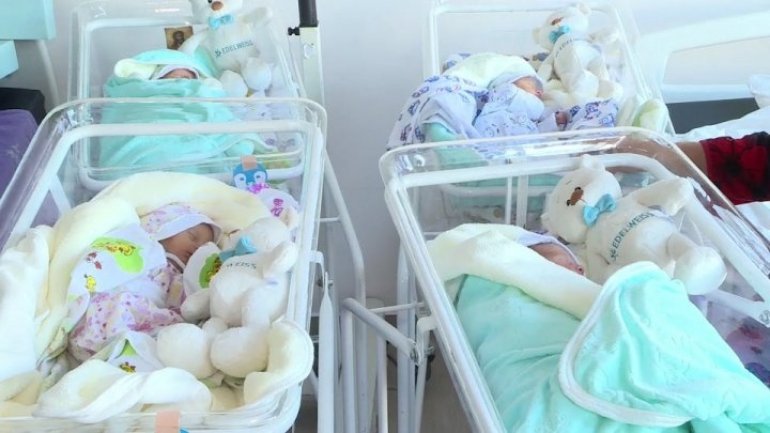 A Moldovan spouses who have not had a child for 17 years just gave birth to 4 kids at once, three boys and a girl. The babies were given lots of gifts from Vlad Plahotniuc's foundation Edelweiss.

The four babies were conceived following in vitro fertilization. The woman tried for 17 years to bring a child into the world, and now her joy is endless.

"The first day I wanted to take care of my children, not letting grandmother hold them," said Natalia Ursu, mother of quadruplets.

Father and grandparents talk about little ones with tears in their eyes.

"I saw them first, my wife was in the operating room, when I saw them I was very happy. Thank you very much to Mr. Plahotniuc, Edelweiss Foundation," says Ion Ursu, the quadruple father.

"I was happy and I wanted to see them if they were healthy. I waited for 17 years," said Valentina Dodu, grandmother.

"As usual, such pregnancies result in premature eminence, and even the rate is very high. In that case, the patient would be given the necessary treatment to keep the baby in a satisfactory state", said Irina Castravet, head of the department,  BMI pregnancy therapy.

Realizing how hard to raise four children, Natalia decided to ask for the help of Vlad Plahotniuc's foundation Edelweiss. The organization responded immediately to the call.

Over the past four years, at the Mother and Child Institute, four women have brought the world quadruple.

"Multiple pregnancy is a rather complicated problem, pregnancy is not a physiological task, more complications occur during pregnancy," said Sergiu Gladun, director of the Mother and Child Institute.

As future mothers have better conditions and to ease the work of employees of the Mother and Child Institute, Vlad Plahotniuc Foundation Edelweiss donated to the institution several stainless steel trolleys for transporting food, drugs, linen and waste.

In 2016, Vlad Plahotniuc Foundation Edelweiss initiated the campaign A New Life to support young families. Since then, nearly 11,000 primary needle boxes have been distributed to the birth of a child.