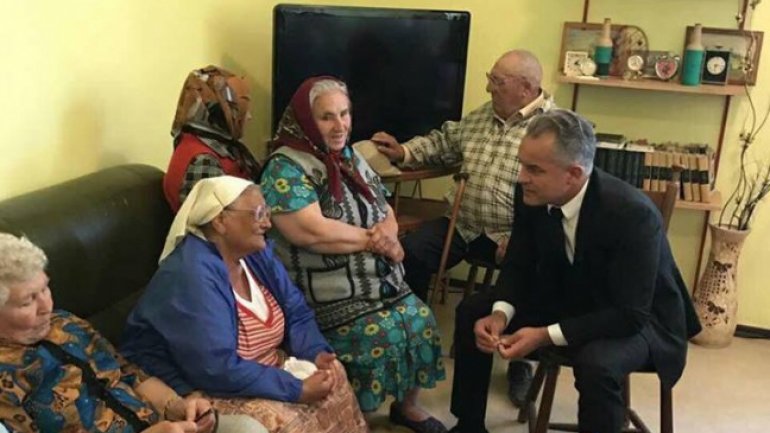 The president of the foundation, Vlad Plahotniuc, went to a beneficiary and showed that the elderly must not be forgotten.

Olga Baltaga is 77 and has worked as a post-woman in the village of Ghelăuza in the central district of Străşeni. But she has few guests.

She has been in a wheelchair for 10 years but she keeps optimistically coping with hardships.

"My health is not as bad, but I am afraid for it not to get worse,” she said.

She adds after the launch of the Respect For Seniors campaign, started by Vlad Plahotniuc’s Edelweiss Foundation, the burden of her elderliness is much easier.

Moreover she was much surprised to see Vlad Plahotniuc paying her a visit to ask how she was going.

The founder of Edelweiss promise to get her a ramp. The news was gladdening the woman who keeps staying only in her house for years, seeing the sun only through the window.

"Sometimes I cry, staying in the house alone. It’s very hard?" she said.

As part of the Respect pentru seniori campaign, 40 elderly are weekly visited by medical and social assistants in order to check up their health and spiritual states. They also get food parcels.

Leaving her with the promise to come to her again, Vlad Plahotniuc visited a daily center for seniors managed by an NGO called “Neoumanist.”

A woman invited him to dance. Then Vlad Plahotniuc painted color books with the elderly, while a man insisted to give him a present.

The Respect For Seniors Project was launched in cooperation with the Austrian Embassy to Chişinău, who’s become a trustworthy partner both socially and economically.

"We all want to contribute to bettering the elderly’s life standards. Some we visited today and offered social and medical services at their homes. I am still excited after my visit to an asylum endowed with modern equipment, the personnel is very careful. They are qualified to provide the seniors with medical assistance,” stated the president of the Edelweiss Foundation, Vlad Plahotniuc.

"The project is implemented here as it is in Austria. I am happy the Edelweiss Foundation is part of the team and support this grand project," said a representative of the Austrian Embassy, Gero Stuller.