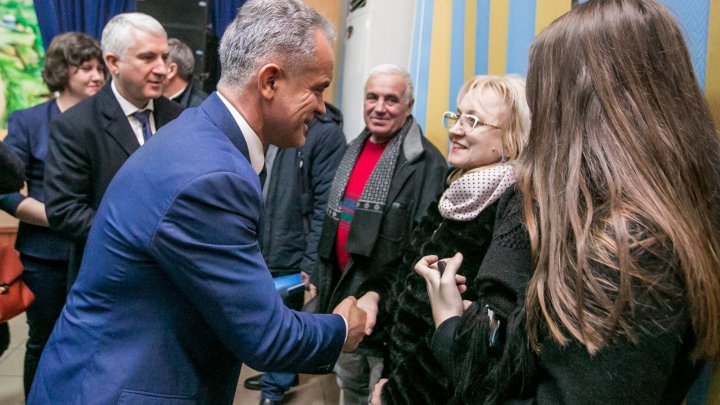 Order, discipline and efficient management of state institutions yield profits to stage budget and implement successfully projects targeted to improve citizens'welfare. It has been said by PDM chairman, Vlad Plahotniuc, candidate on constituency no.17 in Nisporeni, local of Grozeşti.

PDM leader said there is always better place which motivates positive works after the parliamentary elections.

"I'm very glad to see you return to the village. I said to the big world that I'm asked by everyone how I have so much energy. I work from early morning till midnight and sleep two, three, four hours. I was educated strictly by my father, my grandfather. I've learned and I don't stop", said Vlad Plahotniuc, candidate in the constituency no. 17, Nisporeni.

Vlad Plahotniuc told his associates how to implement in short term several projects such as Good Roads for Moldova, Caravan of the Vision, A Doctor for You, as well as to increase pensions and wages.

"We collected 30% more in budget in the first two years by order and discipline. I simply don't give up on theft. Democratic Party already reached every citizen with projects we have conducted", explained Vlad Plahotniuc.

PDM leader wants to modernize all localities in the country like with Grozeşti.

"We see changes when comparing the current village with what it was four years ago. He always keep his words", said a local in Grozeşti.

"You must have a strong partner to maintain the works. You know we have found a strong partner. An applause to Mr. Vlad Plahotniuc", said Liliana Mocanu, director of Prometeu High School in Grozesti village.

Changes in well-being ensures locals to have decent lives and persuade them to remain home. One of them is ex-classmate of Vlad Plahotniuc. After 25 years working in Russia, the woman wants to participate in the modernization of her native village.

"I was raised here, I miss this place so much so I decided to return. I see it's still beautiful after years and I wanted to contributed in developing it. Let's do it together", said a village inhabitant in Grozeşti.

Some locals have come up with project proposals for the village. They even submitted written proposals.

"Thank you for everything you did for our children. However, our road is still bad", said a local.

"We'll start to do it in spring", said Vlad Plahotniuc.

Vlad Plahotniuc also met with the staff of the Nisporeni family physicians' center. Later, he arrived in the village of Bălăureşti. The leader of the Democrats listened to the wishes of the people and assured them that the good initiatives of the Democratic Party will continue after the elections.

"Look what we've done. It's big difference. Let's do something bigger. Vote for Democratic Party then", said Vlad Plahotniuc.