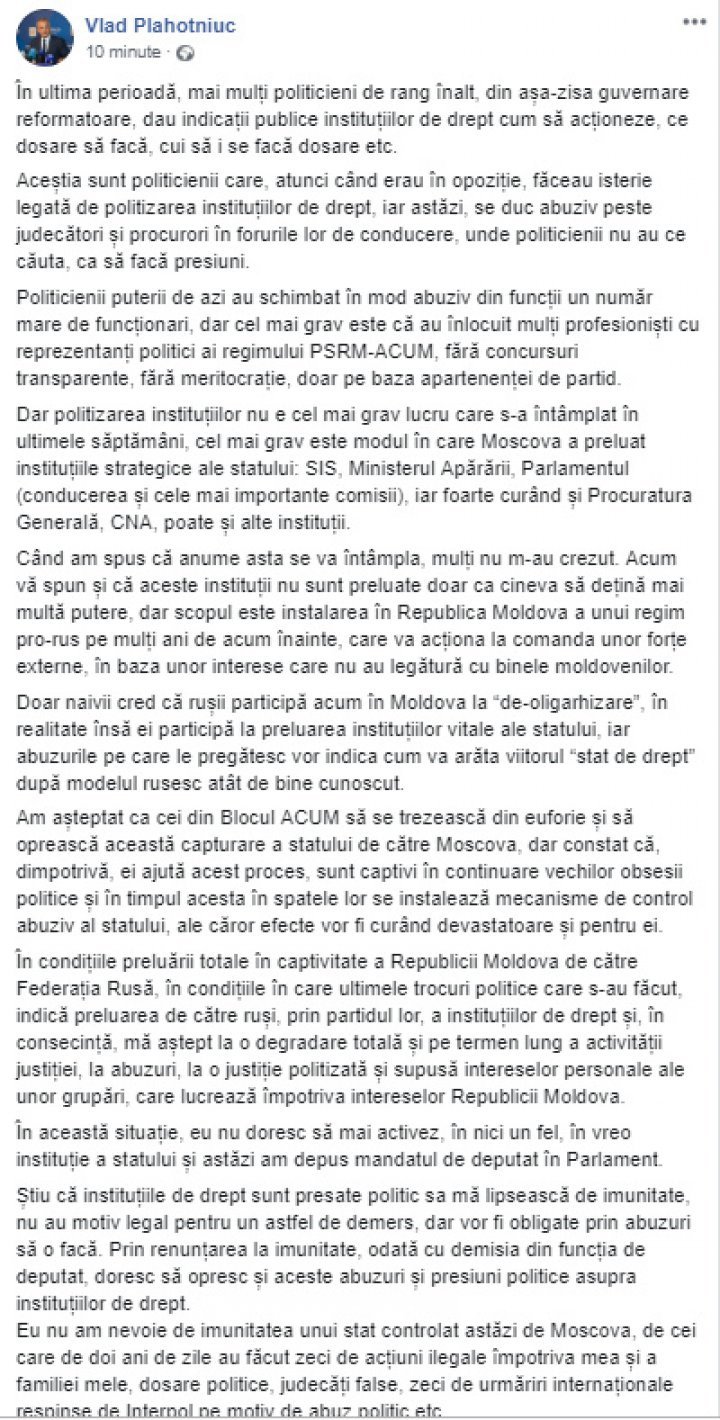 Vlad Plahotniuc submitted deputy mandate in Parliament. On a Facebook post, he said that Moldova was taken over by Russia and he no longer wanted to work in any state institutions.

"In the last period, several high-ranking politicians, from the so-called reforming government, give public instructions to the law institutions how to act, what files to do, whom to file.

These are the politicians who, when they were in opposition, made hysteria related to the politicization of the law institutions, and today, abuse judges and prosecutors in their leadership effort.

Today's power politicians have abusively changed a large number of officials, but the worst is that they have replaced many professionals with political representatives of the PSRM-ACUM regime, without transparent competitions, without meritocracy, only on the basis of party membership.

But politicizing the institutions is not the worst thing that has happened in recent weeks, the worst is the way in which Moscow has taken over the state's strategic institutions: SIS, the Ministry of Defense, Parliament (the leadership and most important commissions), and very soon and the General Prosecutor's Office, the CNA, as well as other institutions.

When I said this was going to happen, many didn't believe me. Now I also tell you that these institutions are not just assumed to have more power, but the purpose is to install a pro-Russian regime in Moldova for many years from now, which will act on the command of external forces, based on interests that are not related to the good of the Moldovan people.

Only the naive believe that the Russians now participate in "de-oligarchization" in Moldova, actually they participate in taking over the vital institutions of the state, and the abuses they prepare will indicate what the future "rule of law" will take after the Russian model.

I waited for the ACUM bloc to wake up from the euphoria and stop this state capture by Moscow, but I find that, on the contrary, they help this process, they are still captive to the old political obsessions and during this time they are settling behind them mechanisms of abusive control of the state, the effects of which will soon be devastating for them.

In the conditions of the total captivity of the Republic of Moldova by the Russian Federation, in the conditions in which the last political exchanges that have taken place, indicate the takeover by the Russians, through their party, of the law institutions and, consequently, I expect a total and long-term degradation of the activity of justice, the abuses, the politicized justice and subject to the personal interests of some groups, which work against the interests of the Republic of Moldova.

In this situation, I wish not to work anymore in any state institutions and today I submitted my Parliament deputy mandate.

I know that the law institutions are politically pressured to deprive me of immunity, they have no legal reason for such an action, but they will be forced by abuse to do so. By renouncing immunity, with the resignation of the deputy, I also want to stop these abuses and political pressures on the institutions of law.

I no longer want an immunity from a state controlled by Moscow, by people who have been acting illegally against me and my family, political dossiers, false judgement, dozens of international pursuits rejected by Interpol due to political abuse, etc.

Moscow's desperation to control the General Prosecutor's Office and the Moldovan justice system in general is given by the very visible purpose of continuing to harass and intimidate me, my family and my supporters. It is the way in which Moscow has been fighting against me for years, filing numerous fabricated files. The international community and Interpol have found that they are politically motivated, false and have refused Moscow's requests.

However, in partnership with those from the ACUM bloc, Moscow is currently controlling the Moldovan law and justice institutions, and certainly hopes that, by abusively using the Moldovan institutions, this time they will be more successful and eventually transform Moldova. in a servile "ally" of Russia.

I defended myself against everything without having immunity at that time. This's how I will continue.

In this situation, when the mandate of deputy is no longer worth much, I cannot fulfill the obligations to the Nisporeni voters, those who made my mandate most representative in the current Parliament by the number of votes.

It would not be fair to them if I occupy this place as long as I cannot fulfill my mandate received from them, for reasons that do not depend on me. But I will help them otherwise, perhaps even more effectively, because I have a lifetime debt to them for the massive trust they have given me, "Vlad Plahotniuc said.