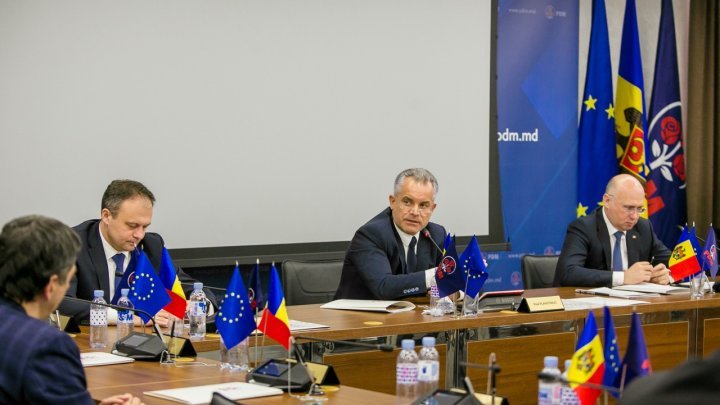 "Democratic Party will review all reforms implemented, the party will complete them, will prioritize them for the main needs of our citizens, not from different conditionality." The statement comes from PDM chairman Vlad Plahotniuc, who presented the political vision of the party over the resolution voted yesterday in the European Parliament.

Vlad Plahotniuc pointed out in a press briefing after the meeting where the issue was discussed, that all complete reforms until now target not only to fulfill the commitments with external partners but also to modernize the country. For implementing the reforms, PDM has assumed huge electoral costs, considering it deserves this risk, because the effects in the long-term will benefit people of Moldova.

PDM leader stressed that the commitments were fulfilled in relation to the European Union, however, there is a parliamentary group, which politically supports some opposition parties in Moldova, ignored the fact that Moldovans have honored their obligations, implementing heavy reforms in recent years. They decided to deprive the promised and deserved money so that PAS and DA can gain electoral benefits in the future elections.

The PDM leader pointed out that there are people in Brussels who really keep the truths in Moldova: from European Commissioners to other important officials to whom the Democratic Party remains grateful.

"There was no broad consensus on the issue in the European Parliament, on the contrary, there were many MEPs who criticized its content and the unfair attitude towards the citizens of the Republic of Moldova. Regretfully, there could be another effect of this resolution, a more dramatic one - the strong decline in Moldovan citizens' confidence in the European Union. This happened in 2015, and we have restored the people's confidence in the EU to a record high", said PDM chairman Vlad Plahotniuc.

Vlad Plahotniuc also said that the resolution has only a political effect and that it will not produce any financial effects, as the government's economic growth will allow all projects to be continued and even launch some new ones this year.

Prime Minister Pavel Filip reconfirmed that the EP resolution will not affect the Republic of Moldova economically, especially since two international financial organizations - the International Monetary Fund and the World Bank - approved the disbursement of the financing tranches for Moldova.

At the same time, Pavel Filip expressed his disappointment that in the European Parliament the Republic of Moldova was evaluated in terms of political actions and interests of some politicians, not the results of the Government's activity. The Prime Minister pointed out that Moldova fulfilled the actions and reforms undertaken in the roadmap of the Association Agreement, as confirmed by the European Commissioners.

At the same time, Pavel Filip stressed that more revenues will be accumulated in the state budget, and the increases of allowances and salaries planned by the Government will be achieved.

"We will put people's needs in the first place, so that people feel that their lives are changing for the better," pointed Filip.

At the same time, the prime minister urged those who voted for this resolution to be aware of the possible risks they bring, including the diminishing of the population's confidence in the EU.

Andrian Candu, Speaker of the Parliament, referred to the parliamentary agenda that the parliamentary majority will promote in order to clarify electoral legislation to avoid future political situations of this kind.

"Regarding the decision of the court on election invalidation, we can criticize, comment on a decision, but if we try to build a rule of law, we have to respect the decision and see what to do to prevent such things, "said Andrian Candu.