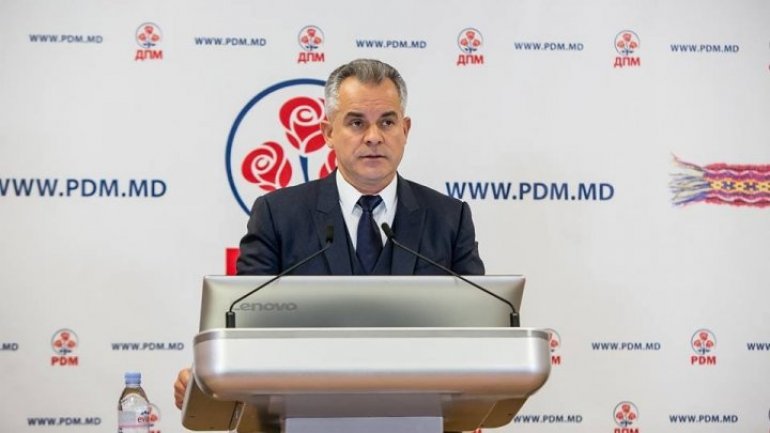 PDM proposes and assumes their responsibility to solve people problems. This statement was made by PDM leader, Vlad Plahotniuc at the end of the meeting of the PDM National Political Council, a meeting in which the Democrats made an assessment of the party's activity during this year.

In the briefing, Vlad Plahotniuc mentioned that PDM managed to bring people closer, and this was possible due to the concrete facts he demonstrated during this time.

"In the speech of my election as president I said that my basic project is to get closer to people, starting from PDM to create a party which serve for people. I can say that I've succeeded in finalizing this process. However, we did some important steps and the citizens' response was positive which encouraged me to continue our work", said PDM chairman, Vlad Plahotniuc.

Vlad Plahotniuc also expressed his gratitude to the citizens of the Republic of Moldova, the citizens who continue to support the party, which is noticed by the increasing votes in the poll.

"I asked my colleagues to understand very correctly the growth of PDM and its result was reflected in the poll. It was rather an encouragement from the citizens and that they trust us to represent them to make the lives better.

The strategy we have come to the National Political Council today is an ambitious one and represents the transition to a new stage in evolution and activity, "the leader said PDM, Vlad Plahotniuc.

Regarding the party's changes in professional activity, Plahotniuc says it is just an impulse to want and do more for the citizens.

"Moving to a new stage implies a new vision, but also additional human resources that will involve our work. The fact that we make some changes in our work does not mean that we are dissatisfied with what has been so far, but it means that we want to do more, that we want our work to go to a higher level,"said PDM chairman Vlad Plahotniuc.

The PDM leader also spoke about the ambitious projects of the party aimed at changing people's lives.

Plahotniuc also mentioned that PDM will come up with new initiatives related to state institutions, initiatives that will also aim at people.

"The basic principles that PDM will continue to work on are: attitude towards people, care for them, justice, development, dignity, values. We will continue on this line, we will  monitor the activity of state services and will demonstrate that our commitments are accompanied by facts, "said PDM chairman Vlad Plahotniuc.

Also, PDM made a balance sheet on the political scene in the country. The report was presented today, December 14, at the National Political Council of the party.

The Council discussed the dynamics of party and government activity, as well as elements related to the party's strategy for the coming period.

Several points on the welfare of the population are stipulated in the resolution. Thus, the PDM proposes and will assume by doing the solving of the problems of the citizens of the Republic of Moldova.