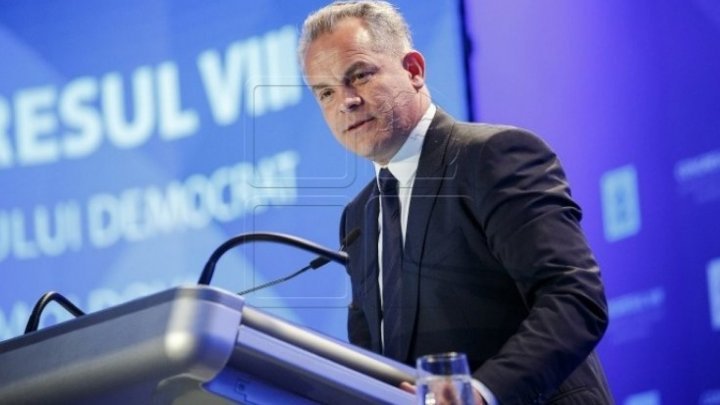 Former PDM president Vlad Plahotniuc has delivered a congratulatory message on the occasion of the Independence Day of the Republic of Moldova. Plahotniuc writes on his Facebook page that "after 28 years, our country is again dependent on foreign interests and influences. We have returned from where we once fled - we have returned to foreign captivity."

Moreover, the Democrat also mentioned that "in the two months since the formation of the coalition ACUM-PSRM, Moldova has become more Russian than Moldovan."

Plahotniuc wants the citizens of the Republic of Moldova to be vigilant and to appreciate first and foremost all the real actions and facts, not the words and promises.

"On August 27, on Independence Day, we celebrate the great historical event of 1991, we celebrate the courage of those politicians, who gave Moldova the chance to become a modern, sovereign and powerful state. On that day, Moldova really wrote a glorious page in its biography.

That was an extraordinary historical achievement, which makes it even more painful that today, after 28 years, our country is again dependent on foreign interests and influences. We returned from where we once fled - we returned to foreign captivity.

Today, I cannot risk the safety of myself or my family and be in the country, along with friends and colleagues, precisely because I have fought with all firmness against those who wanted to occupy and oppress the Republic of Moldova. This fight proved to be unequal, my opponents were too numerous and too powerful, and today I regret that, through various treason and treachery, Moldova was taken under the control of foreign forces, directly or through their treacherous political intermediaries.

Unfortunately, Moldova can no longer be called independent, because there is no independence when the state institutions are run by loyal political leaders of Moscow, which are also blackmailed, when the force organs are passed in parallel management of foreign secret services, when the Prosecutor's Office, CNA , SIS, the Army, the Supreme Security Council and others have a double agenda and work under Russian political influence. In the two months since the formation of the coalition ACUM-PSRM, Moldova has become more Russian than Moldovan. In these two months actions that are nothing less than treason of Homeland.

I want to remind you here that, together with the Democratic Party of Moldova, as president of the PDM, I was the only serious obstacle to Russian imperialism in the Republic of Moldova: we stopped Russian propaganda, we declared Russian dignitaries persona non-grata, we sent diplomatic protest notes, we ended the interference of the secret services in the country's internal political affairs, asked the UN, and a resolution was obtained for the withdrawal of Russian troops from Transnistria and so on.

The fact that we opposed so many years of the Kremlin's influence on Moldova resulted in adverse consequences: the Russian special services made criminal cases against me, organized a large campaign of political defamation, endangered my life and the safety of my family. Every effort was made to force my departure from my beloved country, to be denigrated without any real factual foundation, to prevent my political activity in Moldova.

Although I am in great danger, I will continue to resist Russian influence, I will say things by name, I will firmly believe that Moldova will restore its independence and sovereignty, through the will of its citizens, who are far more patriotic than politicians who are in government today.

On the occasion of August 27, I want to urge the citizens to be vigilant and to first appreciate all the real actions and facts, not the words and promises. I wish them to be again at the height of those who fought three decades ago for the country's freedom.

And to the politicians who are in government today, sooner or later, your cheek will no longer be hidden by the foreign power you serve. People see and do not forgive, "wrote former PDM president Vlad Plahotniuc on his Facebook page.