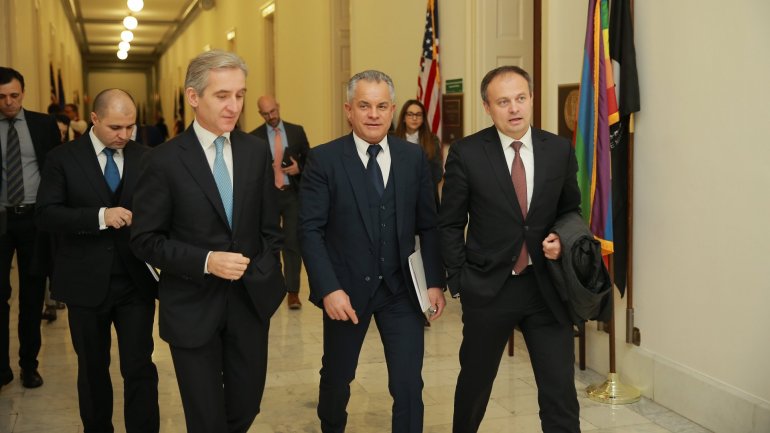 The talks were based on subjects of international interest, accentuating the situation from Republic of Moldova and the region.

Will Hurd has appreciated the efforts Republic of Moldova made to get closer to the West, stating that Russia is a matter of concern for United States. At the same time, he expressed his regrets that the international agreements regarding the Transnistria region (including the OSCE summit decision from Istanbul, 1999) were not respected.

Senator Christopher Andrew Coons, during a meeting with PDM president, Vlad Plahotniuc, confirmed that they understand the importance of Republic of Moldova in the region, including the role it played and will play in the zone, along with Ukraine and Georgia. Senator Coons also said that he understands that there was much done and the country made many progresses, as well as the existing risks over the frozen conflict Republic of Moldova goes through.

Congressman Markwayne Mullin also claimed that he firmly supports Republic of Moldova's European integration. At the same time, the American official also said that they support all the efforts made to combat the hostile actions from Russia.

President of PDM  gave a presentation of main reforms the Government has done during 2016 and 2017, accentuating the support European Investment Bank, World Bank and European Union offered for those reforms. Vlad Plahotniuc spoke of measures to stimulate the business environment and reduce bureaucracy. The dialogue has also overviewed the efforts Republic of Moldova made for electricity interconnection with European Union, through Romania.

Regarding national security, president of PDM, confirmed that Republic of Moldova is the target of a hybrid war of Russia, which includes aggressive propaganda, unfavorable economic measures, as well as supporting pro-Russian political power from the Country.

Vlad Plahotniuc mentioned that Russian troops continue to remain in Republic of Moldova and our country insists on their withdrawal. Speaking of internal politic, the democrat underlined that the next parliamentary elections play a very important role for the future of Republic of Moldova.

"It is important to remain on an European track and not allow the power to be taken over by pro-Russian forces" PDM president announced.

At the invitation of the democrat leader, the three American officials declared their intention to visit Republic of Moldova.