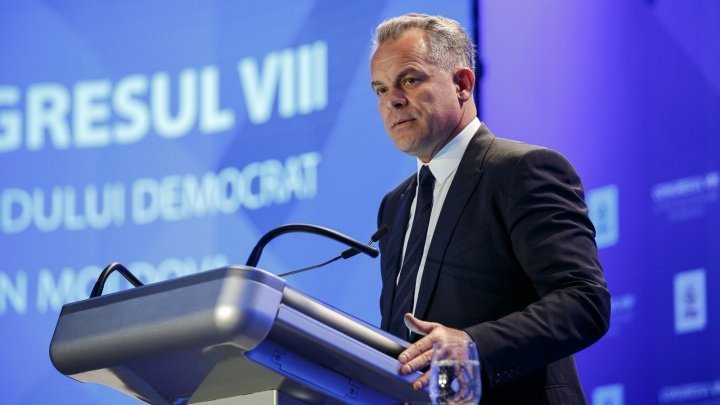 At the weekly meeting of the Democratic Party of Moldova, PDM chairman Vlad Plahotniuc came with some statements after the European Parliament adopted a resolution blocking Moldova's funding.

"I will express the political vision, then my colleagues will express vision of the Government and Parliament. I want to clarify from the beginning that the Democratic Party remains fully committed to process of reform and implementation of good political practices in our country, no matter what political games will be continued. We have asked our colleagues in the Government and Parliament today to review our cooperation with the European Union in order to improve and revive it, starting from joint actions, more open and efficient communication.

All of the harsh reforms we have done so far have not only been aimed at meeting our commitments with external partners, but they have had the role of modernizing our country.

We have assumed huge electoral costs to implement these reforms, but we considered it worthwhile taking this risk because, in the long run, the effects will be beneficial for the people of the Republic of Moldova.

The International Monetary Fund has given us a new installment of money after we successfully fulfilled its commitments.

We have also fulfilled commitments in relation to the European Union. But a parliamentary group that politically supports some opposition parties, decided that it does not matter that Moldovans have endured heavy reforms in recent years, they have to suffer further for PAS and PDA to have electoral benefits in the upcoming elections.

And if they call for the political interest, some thought that they can use an incorrect gesture towards our citizens and punish them, because the Government did not accept to take legal action to change the decision on invalidating elections.

In reality, this resolution, created by Maia Sandu and Andrei Năstate against the Moldovans, will not achieve the cynical purpose that they targeted, that citizens suffer financially from it. The resolution only affect politically, not financially. Because the government's economic growth will allow all projects to continue and even launch some new ones this year.

But what PAS and DA have achieved in this resolution is a signal passed to Moldovan citizens that they are in vain to endure the effects of the reforms agreed by the Government with the EU because the reward may not come if politicians have other interests. However, we have to be fair and to mention that many MEPs did not agree with how these parties tried to make a political blow to Moldova.

You have all seen that there was no broad consensus on the issue in the European Parliament, on the contrary, there were many MEPs who criticized its content and the unfair attitude towards the citizens of the Republic of Moldova. Regretfully, there could be another effect of this resolution, a more dramatic one - the strong decline in Moldovan citizens' confidence in the European Union. This happened in 2015, and we have restored the people's confidence in the EU to a record high.

Now, it will be hard for the Moldovans to understand why they have been asked to undergo harsh reforms agreed with the Brussels partners because after what they have endured, the promised reward will be deprived.

Just as it will be difficult for them to understand why this decision comes as an effect of the fact that the Government and the PDM did not give up the blackmail and did not accept to get involved in the wrong way and to influence in any way the decision on invalidation.

The yesterday's vote in the European Parliament has signaled that Moldovan citizens are not treated equally, but strictly on political criteria, depending on what the leaders of some political parties want. It is an unfair and discriminatory approach.

But what the Government will do is not to allow this resolution to have negative effects on citizens, as the leaders of the PAS and the PDA wanted. That is why, even today at the weekly meeting, we discussed several measures that we will take in the coming period, but we will also review the reforms under way. All will be accomplished, but we will prioritize them, taking into account the main needs of citizens, not from different conditionalities, so that they feel their benefits as well as economic growth as soon as possible.

There are people in Brussels who really are in Moldova: from European Commissioners to other important officials, and we very well understand the difference between actions generated by political interests and actions in which they can act freely, based on the findings. Therefore, even after this unfairness towards the citizens of Moldova, the Democratic Party remains grateful to the European officials, who are actively and effectively working with the Government, and our response as a government will be based on concrete results, just like before.

We will implement more reforms as before and we will work actively, including for strengthening the independence of the judiciary, but also for strengthening the rule of law. In the next weekly sessions of the party, but also in the work of the Government and Parliament, we will come up with actions that will focus on immediate needs of the citizens. I wanted to tell you at this stage. Next, I will ask my colleagues to express their vision"said PDM chairman Vlad Plahotniuc.

PUBLIKA.MD reminds that the resolution was proposed by the political partners of Maia Sandu and Andrei Năstase. Thus, through the document proposed by Maia Sandu, Andrei Năstase, but also by PLDM leader Viorel Cibotaru, the European Commission was recommended to suspend macro-financial assistance and budget support for our country.