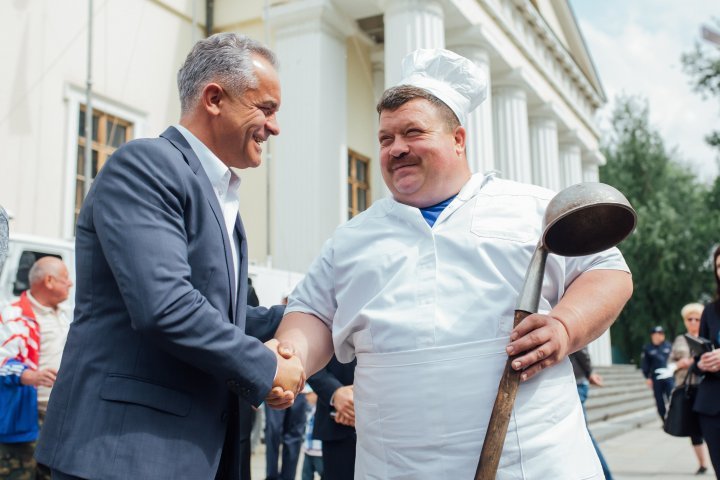 Victims of the Second World War were commemorated today in front of the Nativity Cathedral. Democratic Party of Moldova has prepared for both visitors and veterans a number of special events.

In front of the Nativity Cathedral was arranged a feast, where war veterans were invited to eat some porridge. Among the guests counted Moldova's leaders, as well as president of PDM , Vlad Plahotniuc, who was surrounded by people, tasted the military food along with veterans and took pictures with children.

Leader of the Democratic Party came with President of Moldovan Parliament, Andrian Candu and Prime Minister Pavel Filip, having greeted the cook and took pictures with him.

After speaking with the cook, Vlad Plahotniuc also greeted the people who decided to attend the event at the Nativity Cathedral.

"-It tastes amazing. Thank you for taking care of the elders. We love you and thank you for all the good deeds"

"-I love that the country's leader came out to speak with the people. It is simply wonderful."

"-I am extremely happy to have had the chance to meet you. I always look at you and think: This is the man who will lead us"

Later, the official was surrounded by veterans.

"The changes you have made for veterans can already be felt. Our lives changed for the best" a veteran said.

"The changes have only begun" Vlad Plahotniuc said.

"What a surprise, this is unexpected! Can I take a picture with you? I doubt such a chance will come again. This is fate."

Vlad Plahotniuc grabbed a plate of porridge and sat at the table with the guests. A war veteran claimed that he has not eaten such food since the war.

"I cannot express with words how well it is all organized. Thank you to those who organized the event" a veteran said.

"-It tastes amazing, complements to the cook."

Both local and foreign guests have took the time to taste the porridge.

"Everything is well organized. I was pleasantry surprised. I am from Ukraine" a man said.

PDM made sure that not only adults, but children as well will have a nice day, having organized multiple events.

Vlad Plahotniuc: -  How old are you?

Vlad Plahotniuc:- What do you wish to be when you are older?

Vlad Plahotniuc: - But where is your mother?

Children participated in a competition where they had to draw on the asphalt.  The pictures will be posted on PDM's official Facebook page, while the best painting will be used to create a stamp.

"- I wish to draw some grass, a house with flower garden and the sun."

"- I wish for peace, for people to be kind and our City to change for the best."

Later K9 have offered a spectacle to the guests.

"- The spectacle was amazing. I love hunting dogs, they are special."

"-I wish to praise how well organized this event is. The food and drinks were amazing."

The event will continue in the Great National Assembly Square, where a concert will begin at 17:00 local time.

Read Also: Schedule of concert dedicated to Victory and Europe Day in Chisinau