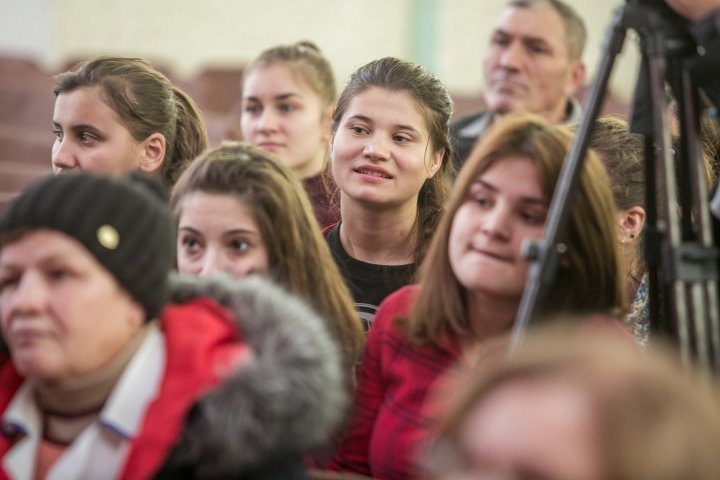 The education system needs a reform to adapt to the requirements of the labor market. In other words, the economic growth will be ensured to enable further projects to develop country. It is the promise of the PDM candidate in the constituency no. 17, Vlad Plahotniuc, during a meeting with pupils and teachers of the Nisporeni School of Professional Studies.

The institution can be considered as an example of schools where dual education is practiced. Classes of practical lessons are equipped with modern equipment, purchased with the support of Swiss funds. Vlad Plahotniuc was interested in the conditions for students and visited a class of practical lessons for future winemakers.

The PDM candidate in the Nisporeni district also visited one of the most modern wine producing sections in the country, located on the territory of the Nisporeni Professional School.

Later, Vlad Plahotniuc also left a message of support and encouragement in the institution's thanks book. During the visit, the PDM candidate and his team members had a discussion with students and teachers in this institution. The main topics covered the projects already implemented and the reforms to be made immediately after the elections.

"We believe that a vocational school should be strengthened in every area for young people in the village", said a teacher.

"We are going to go for a reform in this system, we must pay close attention to developing economics, and different branch branches of the professional system. This will be after the elections. Our colleagues have lots of debates regarding this", said Vlad Plahotniuc, candidate in the constituency no. 17, Nisporeni.

Other social issues have been addressed in the discussions.

"why didn't you raise salary for participants of the Nistru war why not raise a lion?"

"In the Parliament of the Republic of Moldova there is a bill on the increase of the allowance from 100 to 500 lei. In the context of continuity, surely, this project will be voted", declared Viorica Dumbrăveanu, State Secretary at the Ministry of Health, Labor and Protection social.

People urged Vlad Plahotniuc to continue the reforms initiated after the elections.

"Good things, beautiful things, made with love by people. Things have already started to take another magnitude. We want to know how we will go on, how to achieve, how to proceed towards that progressive future, "said Dumitru Lupei, director of the Professional School, Nisporeni.

"Together with Vlad Plahotniuc, we have done many nice things here in Nisporeni. After the elections, we have a lot of things to do, we have a perspective plan," said Vasile Bîtca, president of the Nisporeni district organization of PDM.

"Others have promised and said that they have no money to pay. From the spectrum of political parties you will not find another party that has a competent team. We are the ones with the facts, not the words, "Vlad said Plahotniuc, candidate in the constituency no. 17, Nisporeni.

Vlad Plahotniuc also visited the Sports School in Nisporeni, where he was practicing weightlifting at the time he was a student. His former coach, Gregory Braşoveanu, remembers the leader of the PDM, as an ambitious and diligent disciple.

"He learned well, at school of music and school of sports. It was evidence of a strong character. He was a vice-champion of the Republic of Moldova in juniors. We should and I think we will vote for our deputy, Vlad Plahotniuc, "said Grigorie Braşoveanu, director of Sportive School, Nisporeni.

Vlad Plahotniuc answered the questions of teachers and athletes, who did not hesitate to take pictures with the politician. Coaches from the Nisporeni Sports School can boast of several European weightlifting champions. Among them are Igor Bour.

"Vlad Plahotniuc did a lot of beautiful things, even the re-innovation of our arena, for children, for athletes, roads. In 2010 we brought in new five new gears, brought equipment to children," said Igor Bour, European weightlifting champion from Moldova.

The sports school is located on the territory of the stadium, which is currently undergoing modernization, according to international standards. The project also provides for the construction of a hotel. The investments in this project amount to 130 million lei.