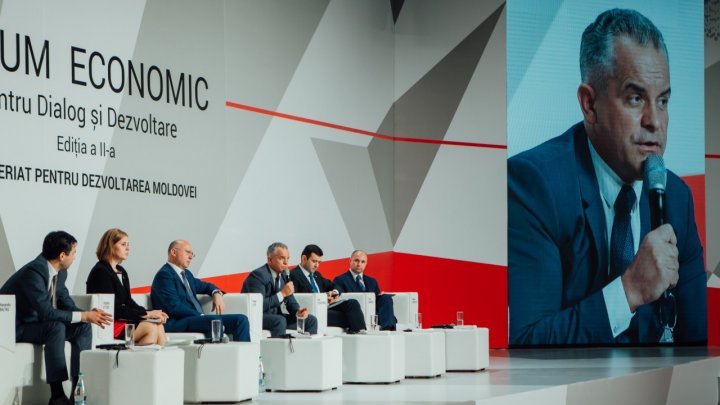 With the reforms initiated, the government wants to become a trustworthy partner for entrepreneurs, including foreign investors. The message was made by Vlad Plahotniuc, at the Moldovan Businessmen's Association. As chairman of the organization, he thanked entrepreneurs for their efforts in developing the economy. Vlad Plahotniuc mentioned that, along with the ruling coalition, he is implementing reforms to give businessmen opportunities for development.

"We have a plan for the development of the Republic of Moldova for four years, we begin with this package to implement it at least for four years. Personally, politically I have only one goal: to do everything good for Moldova, for the development of the country, so that the people of the Republic of Moldova will not leave again, and those who are here will not regret having stayed ", said Vlad Plahotniuc.

The event, which brought together over 800 entrepreneurs, was attended by Prime Minister Pavel Filip. The Head of the Executive referred to the package of laws that come to reduce the fiscal burden and business pressures.

"Sometimes we have the feeling that we are the hand that different partners could pick chestnuts out of the fire. But that doesn't derail us, because we all know that these measures are not just better for business, but better for all Republic of Moldova", said Premier Pavel Filip.

In the forum, entrepreneurs also came up with proposals for governance.

"We don't need to think that only export brings money to the budget. Consumption on the local market is also another source of income. Why not to promote honey in schools, kindergartens and other state institutions?" said Nicanor Negru, an entrepreneur.

"When there is a lot of harvesting in the autumn, we have problem with people at work. He receives social support and wants to be hired but he doesn't pay tax", explained Vasile Belous, farmer.

"The law of the elites is being drafted, it is to be approved. If it had not been approved in Parliament, problem with the seasonal employees and the tax payment is solved", said Pavel Filip.

"I want to say thank you, I want to say to you that we are glad that you have presented this draft law today and expect results from them. Thank you very much," Odiseea Bîta-Bubuioc said.

"I know about the difficulties you have had. The international bodies, many of them were against this reform," said Igor Ungureanu, entrepreneur.

"Today's government has done a lot for VAT refunds, we have never had such opportunities, a very fast refund. Practically, we get all money back in account in a month," said Oleg Gorgan, an entrepreneur.

"It's important for us to create conditions to remove all abuses that exist in the Republic of Moldova. We know them. But it's difficult to change the mentality, institution inertia, mentality of people, it's matter that takes lots of time", said Vlad Plahotniuc, president of AOAM.

This is the second forum for dialogue between entrepreneurs and government, organized by the Moldovan Businessmen Association. The next meeting will take place in the autumn.