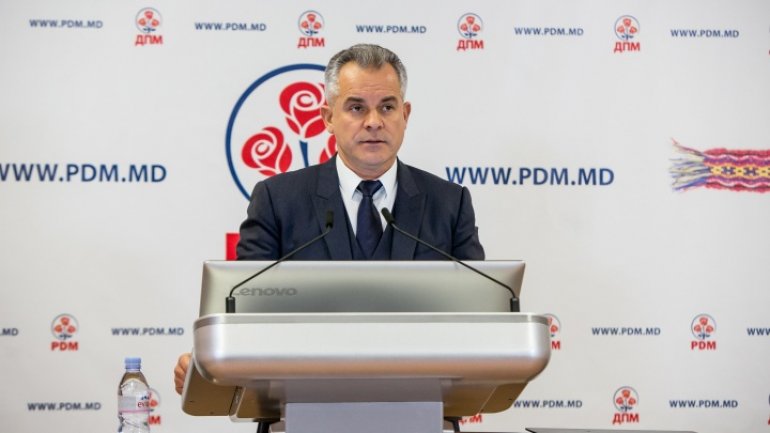 The file created by Moscow on PDM leader Vlad Plahotniuc and other Moldovan officials was nothing but the reaction of the Russians after the Chisinau authorities released information about Russian Laundromat, a scheme to move $20–80 billion out of Russia from 2010 to 2014 through a network of global banks, many of them in Moldova and Latvia.

This investigation seemly bothered Russians who started exerting pressure on Moldovans. The statement was made by PDM chairman Vlad Plahotniuc in an interview for Deschide.md.

According to Plahotniuc, some people in the Russia have tried to block the investigation regarding the money laundering. Moreover, some MPs were directly pressured when they passed the laws on securing the banking system in Moldova and later called the anti-propaganda into question.

"I think anyone who saw the information in the public really understands what is behind this file. It is a continuation of pressures that have already been for over a year, not only on me, but also my colleagues in the Government, Parliament and Coalition. I manage my own situation, but other colleagues and officials have already been blackmailed, public attitude has been taken and Foreign Ministry also have taken some further steps.

"Why blackmail has been used? Many would say it was geopolitical, but it's not actually. The pressure was triggered when our authorities touched Laundromat topic, Russian money laundering of 22 billion through bank in Moldova.

"Once concrete actions have been taken with regard to the people involved in this case and when eastern subject has gained international reputation, pressure has also begun. Some people in the Russian Federation, directly interested in this case, have tried to make the Moldovan government intervene to block this investigation. There were also very direct pressures on some deputies when those laws on bank security were voted, because that also meant blocking the activity of some groups in the Russian Federation who used our banking system for illicit purposes. Pressures intensified even after the anti-propaganda law and other initiatives were raised, "said PDM leader Vlad Plahotniuc.

Vlad Plahotniuc claims that the Russians made about 20 requests to Interpol on his name during a year. Every time, however, these requests were rejected and categorized as political pressure.

"There were around 20 requests during a year, this demonstrates again their harassment and how much effort they made to invent so many different facts. However, all requests were rejected and categorized as political pressure.

"There are other colleagues in the Government or Parliament who were involved in such political harassment, some of them, sent countless requests to Interpol, which yet were rejected", said PDM leader Vlad Plahotniuc.

The PDM chairman also said that when the Chisinau authorities released details of the Laundromat case, he was contacted by some people in Moscow who threatened him, even asking him to stop the investigation. Vlad Plahotniuc states that this is not a personal conflict, as the press wrote, mentioning that until he became the leader of the PDM and began to coordinate the political activity of the Chisinau coalition, he had no conflicts with those of the Russian Federation.

"You can often find the mass media writing, even exaggerating, of my relations with influential people from Russia. I had and still have friends there, my relations with them has not changed, but even if they have influence, I have never asked them for favors to stop this harassment. As I said before, I was pressured and blackmailed since authorities have released confidential files from Landromat's case. I have no doubts here. At the time, I was contacted by certain people from Moscow who clearly warned me what will happen if this subject will not be closed and even came up with various methods to bury Landromat's case, none of which I have done.

Then the promised harassment came, but I did not make a big deal out of it for as long as they only harassed me, but when the pressure came upon Government's and Parliament's officials, the issue became more complex. It added to the actions taken by the Government that those from Russia, most likely provoked and the parties they support in Republic of Moldova, attempted to block, by pressuring officials. Therefore, we do not speak of a personal conflict.

Before becoming the leader of the Democratic Party of Moldova and coordinating the political activity of the Coalition, I had no conflicts with those from Russia. On the contrary, we had balanced relations, even if some would falsely accuse me of trying to take Moldova off the European path, and into a partnership with Russia. Today, everyone can judge me based on my actions and realize how fake all the accusations were. Like many others.

If you wish to deeper understand what instruments Moscow is using nowadays, I suggest you analyse the two so-called pro-European TV channels they use. These are channels that on one hand request financing from Europe, but on another hand are taking part in this political harassment scheme, organized by Russian secret services. I believe that this year will bring more clarity, even regarding the persons who work in the interest of those services. It is harder for them to hide their activity, as everyone have already turned their eyes on them" president of PDM, Vlad Plahotniuc declared within an interview for Deschide.md.

When questioned regarding the role Usatîi had in this case and the declarations made by the fugitive, Vlad Plahontiuc announced that he does not know the details of the proclamations, as he never received any official notice from the political case forged in Moscow. Furthermore, the leader of the democrats is sure that the declarations were not publicized, because Russia know very well that the evidence are all false.

"One of the good sides of mass media is that they own a big archive of all the important events. If you read the press from 2014, you will notice how many articles were allegations made against me: that Usatîi was my political project, that I am behind everything he does, among other things. I do not know exactly what statement he made, because I never received any official notice from that political case forged in Moscow, nor does it interests me. They hide it, because they understand that all of that is fake" president of PDM, Vlad Plahotniuc declared.