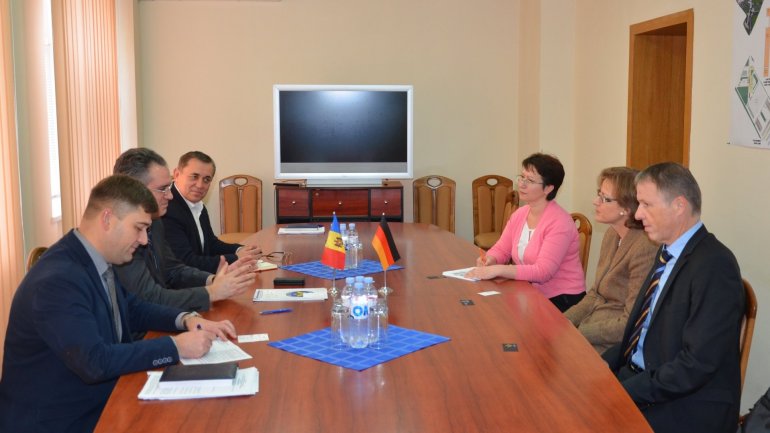 General Director of Customs Service, Vitalie Vrabie has met with Ambassador of Germany to the Republic of Moldova, Julia Monar, where was introduced the new Customs Attaché of the German Embassy in Kiev, also accredited for Republic of Moldova, Ralf Malchin.
The discussed topics focused on several aspects of the bilateral cooperation, reiterating the interest of the Customs Service of Republic of Moldova  in gaining Germany's experience in the second line as well as with K9, but also in other areas for combating frauds. The meeting was also a great chance to draw new direction in the are of common activity of customs services from Republic of Moldova and Germany, including exchanging information between the two authorities.
General Director of Customs Service, Vitalie Vrabie expressed his gratitude toward the Embassy's representatives, for their support in multiple projects, meant to develop the institutional capacity of the customs services from Moldova, as well as for the assistance offered for making collaboration relations with customs services from Germany more dynamic.
”Developing the cooperation with customs services of EU member states and implementing the Association Agreement, including the Deep and Comprehensive Free Trade Areas (DCFTA) chapter, are the main objectives of the customs services. Therefore, we appreciate the opportunity to gain Germany's experience in multiple prioritized areas" Vitalie Vrabie declared.
The official has also mentioned the assistance offered by GIZ in developing the concept of electronic trade, inclusively elaborating a feasible action plan, based on the best practices used by the European Union on this chapter.

In her turn, Julia Monar has expressed her willingness to promote all customs cooperation mechanisms between Republic of Moldova and Germany, regarding commercial trade between the two countries, as well as ensuring their economic stability.
Ralf Malchin has mentioned the importance of developing the customs collaboration relations between the two states, also assuring that during his mandate he will input all efforts to make the dialogue more efficient.
AFLĂ imediat Știrile Publika.MD. Intră pe Telegram