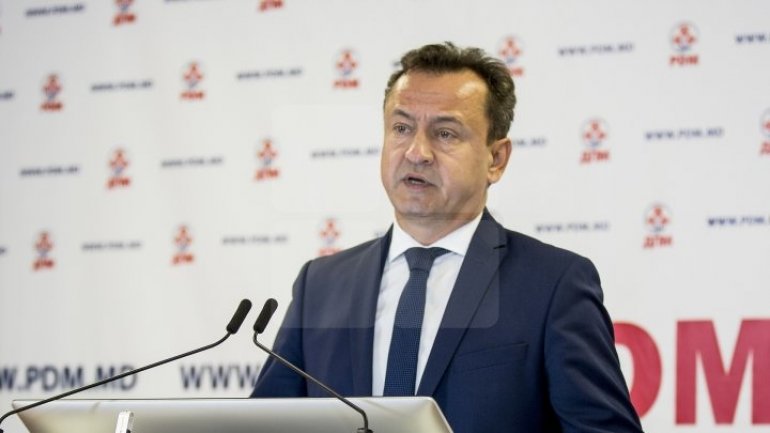 Spokesman of PDM, Vitalie Gamurari declared that the wish of some parties to hold a referendum against uninominal voting system are false. Democratic Party of Moldova condemns the new method of wasting public money through referendums, which Socialists came up with and some Non-Governmental Organizations decided to use, along with PCRM, PN and PDA.

"Some Non-Governmental Organizations along with leaders of parties participating in elections, namely PCRM, PN and PDA have shook hands and now try to extort money from the public budget. Organizing another referendum might cost citizens no less than 60 million lei. Those parties and organizations are initiating referendum against citizens of Moldova, who wish to chose their own deputies at the next elections. I think something like this happens for the first time in Moldova's politics. On one hand, we have those so-called pro-European Non-Governmental Organizations, who act together with far-left parties, in a projects meant to ruin citizen's wish. On another hand, they wish to organize a referendum against the fact that citizens have gained a right they have clearly demanded for many years" PDM's spokesman explained.

Vitalie Gamurari also mentioned that PDM warns citizens that those who wish for the referendum are promoting a false reality.

"The electoral system cannot be changed with less than a year before the next elections! Even the  Venice Commission, which the opposition often speaks of, have clearly states this.They know that this idea will fail from the start. They know that the uninominal voting system cannot be canceled. Yet they use this pretext to create an electoral campaign using citizen's money.  We can conclude that a group of Non-Governmental Organizations are working together with PCRM, PN and PDA and are used as a cover by the parties leaders. They hope to use this referendum to escape the crisis they are facing. Those Non-Governmental Organizations are putting themselves in a very delicate position. They act as politicians and not as civil society's representatives. Therefore, they will be treated as political competitors, taking into consideration that representatives promoting the interests of the parties mentioned above, do not care for citizens, who clearly favor the new electoral system" Gamurari underlined.

As conclusion, Vitalie Gamurari mentioned that regardless of where those actions will lead, regarding the referendum of reversing to the old electoral system: in practice, it cannot happen, from the legal point of view.

"As you have seen, in the 10 local City Council elections that took place not long ago, the opposition that is against the uninominal voting had no candidates. This fact itself tells us of how serious representative of those parties are and points that they are simply afraid of the uninominal voting. Those parties don't have any competent members that can come forward to the voters. Therefore, they do not wish for deputies to be chosen directly, but by parties. What happened in the 10 local elections have clearly shown us the reality of things" PDM spokesman added.