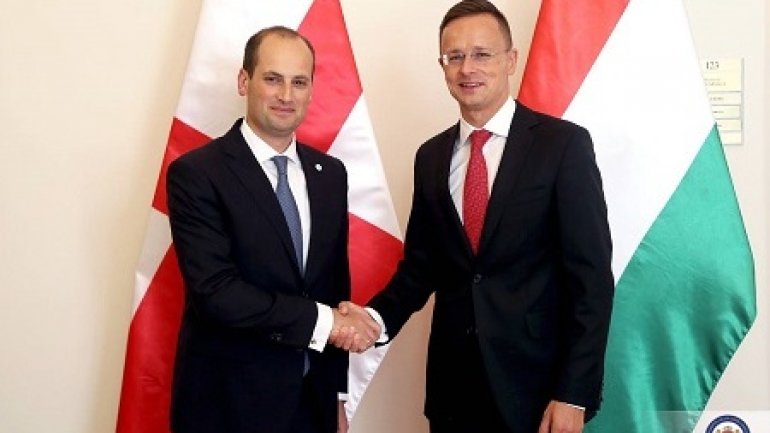 The Visegrad Group (Czech Republic, Hungary, Poland and Slovakia) reaffirms its strong support for the Eastern Partnership and considers it a key factor in the stability of Eastern Europe.

This is indicated by the Joint Statement of the Ministers of Foreign Affairs of the Visegrad Group (V4) adopted in Budapest yesterday.

Based on the Joint Statement, the V4 Ministers reaffirmed their strong support to the Eastern Partnership (Armenia, Azerbaijan, Belarus, Georgia, Moldova, and Ukraine) as a strategic dimension of the European Neighborhood Policy and a key and active factor of stability, security and economic progress in Eastern Europe.

The Ministers emphasised that the Eastern Partnership should have a clear political narrative, a new strategic vision and an architecture that guarantees joint ownership of European institutions, Member States and partner countries.

They agreed that the Brussels Declaration should reflect different aspirations of the partner countries and offer a European perspective for those interested, as well as to set out an ambitious agenda for the Eastern Partnership in the longer term.

They emphasised the need to react strategically to the consequences of the present challenging geopolitical situation both for the Eastern Partnership countries and the European Union.

In this context they underlined the necessity of continuing reforms in partner countries to strengthen their internal stability, resilience and civilian security, and welcomed the Summit’s focus on tangible benefits delivered to citizens of the six Eastern Partnership countries. They also emphasised the importance of cooperation on strategic communication.

The V4 Ministers welcomed the introduction of visa-free travel for Georgian and Ukrainian citizens into the Schengen zone.

"This will undoubtedly contribute to enhance people-to-people contacts among the EU and the partner countries”, they said.

The Ministers reconfirmed that the implementation of Association Agreement/Deep and Comprehensive Free Trade Area is the key task for Georgia, Moldova and Ukraine to further develop their relations with the European Union.

They highlight the special importance of the development of transport and infrastructure interconnections between the EU and the Eastern Partnership countries.

The document reads that "Better connections shall contribute not only to the strengthening of economic cooperation and people-to-people contacts, but also to the tightening of political ties”.