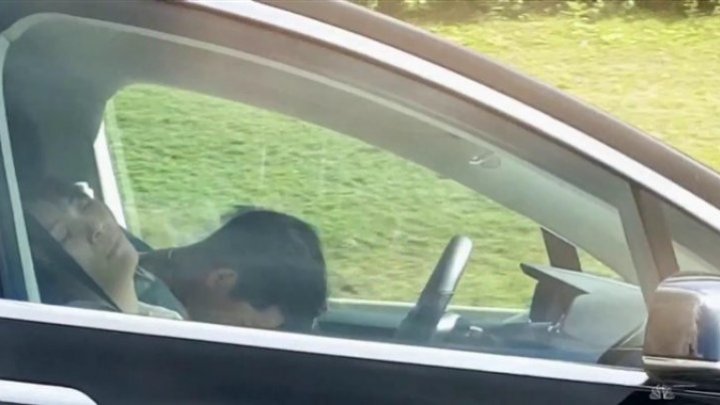 A motorist on the Massachusetts Turnpike captured a man asleep behind the wheel of his self-driving Tesla, keeping up with traffic, in the lane next to him.

Dakota Randall filmed the unidentified man around 3 p.m. on Sunday while he was driving near Newton, Massachusetts, according to NBC Boston.

"I kind of looked over and saw what I thought was somebody asleep at the wheel," Randall said. "I was like that can’t be right, so I did a double-take, looked over and sure enough this guy was just, head between his legs completely asleep."

Randall attempted to wake the driver by honking his horn, but he said that proved to be no help.

It is unclear how long the driver, who was not identified, was asleep, Randall said he only drove alongside the vehicle for up to a minute before speeding away from the Tesla.

The Tesla website says its autopilot feature is to be used "with a fully attentive driver, who has their hands on the wheel and is prepared to take over at any time. While Autopilot is designed to become more capable over time, in its current form, it is not a self-driving system."

"Many of these videos appear to be dangerous pranks or hoaxes," a Tesla spokesperson said in a statement. "Our driver-monitoring system repeatedly reminds drivers to remain engaged and prohibits the use of Autopilot when warnings are ignored."

"Tesla owners have driven billions of miles using Autopilot, and data from our quarterly Vehicle Safety Report indicates that drivers using Autopilot experience fewer accidents than those operating without assistance," the spokesperson added