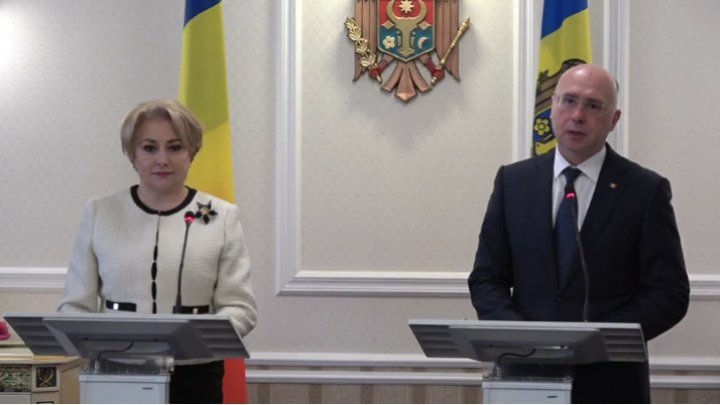 Romania will continue to invest in Republic of Moldova's modernization, the well-being of the citizens and its European track. Developing relations between our countries is a priority for the Government from Romania. The declaration was made by Viorica Dăncilă, during a press conference held along with PM Pavel Filip.

"Romania and Republic of Moldova continue to have a special relations, which causes both societies to have high expectations and interests. Developing our relations is one of the main priorities of Romania's Government. While the strategic aim is Republic of Moldova's European integration" Prime Minister of Romania, Viorica Dăncilă said.

"We have a number of project that are being unfolded, all with a common aim: to make Republic of Moldova's European track irreversible, including its ties with Romania, in terms of energy, infrastructure, institutions and values. We spoke of the project of interconnecting the Ungheni-Chişinău gas pipeline, which is a prioritized project for both Bucharest and Chisinau, as well as it being an important project on the European Union agenda" Prime Minister Dăncilă added.

According to the official from Bucharest: "the project Iaşi- Ungheni- Chişinău confirms Romania's roles as Republic of Moldova's main partner, both for European integration and adherence to the European space."

"Romania wishes to increase the number of investments made in Republic of Moldova. We greet the progresses registered in the energy interconnection, in terms of natural gas. We are interested to finances as soon as possible the agreement between Transgaz and the partner from Republic of Moldova, respecting all terms" Prime Minister Viorica Dăncilă declared.

Viorica Dăncilă also claimed at during her visit to Brussels from last week, Romania's wish to support Republic of Moldova's European track was reiterated.

At the same time, the official from Bucharest assured that Romania will continue to support Moldova in implementing reforms that the Government from Chisinau took upon itself, respecting all terms set with EU and IMF.

PUBLIKA.MD reminds that Prime Minister of Romania, Viorica Dăncilă, will pay today an official visit to Chisinau. The official from Bucharest has arrived in Moldova at 09:30.