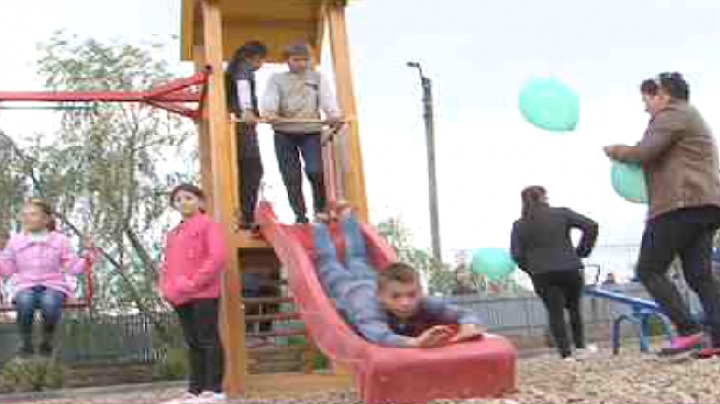 A healthy society starts with happy children. The kids from Grozesti village, Nisporeni district, now have a modern amusement park, set up in the center of the locality by Vlad Plahotniuc’s Edelweiss Foundation. The action is a part of the project “Village of the Future”, which will be expanded throughout the country.

Tens of children from Grozesti village can play at a modern playground, set up in the center of the village, in front of the Cultural House. They can play on swings together with their friends:

“Until now I was playing at home, now I have a place where I can have fun. We can come here to play, to have fun. I thank all people who made this playground for us” said a kid.

“It is very good that they are investing in children, and not only in them, but also for the residents of the village. We thank Edelweiss Foundation and wish them all the best” said a parent present at the opening of the playground.

Local authorities say that this project will contribute to the development of the locality.

“This playground donated by Vlad Plahotniuc’s Edelweiss Foundation will make children’s life more beautiful, more happy because we put our hopes in them, they are the future” mentioned the mayor of Grozesti village, Silvia Crasmaru.

Edelweiss Founder, Vlad Plahotniuc, says that he is connected by soul to his home place, where he launched the first project which will contribute to the development of the children in Moldova:

The project “Village of the Future” will be implemented in many localities throughout the country. Until now, Vlad Plahotniuc’s Edelweiss Foundation has set up 28 playgrounds in almost all district centres.