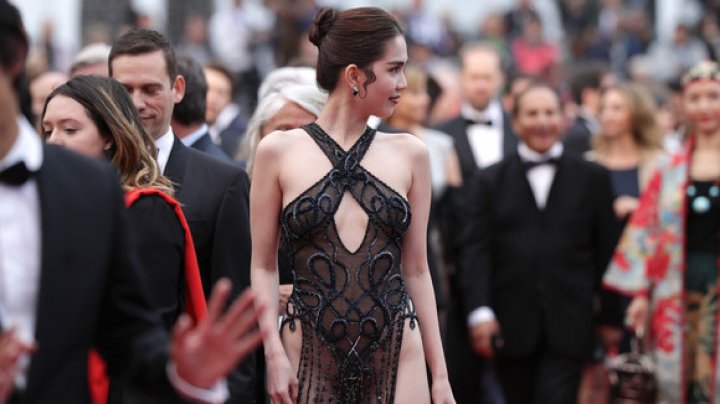 It appears the stars attending Cannes Film Festival are loving flashing the flesh this year.

Over the weekend, Brazilian model and ex-Victoria’s Secret angel Izabel Goulart pulled off the ultimate leggy display with her black lacquered one-shoulder gown.

The racy design featured a daring cut-out bodice that ran all the way from her shoulder to her midriff, revealing her bare chest and taut tummy.

Now another star has been seen in a barely-there design that was guaranteed to turn heads.

The 29-year-old stunned photographers as she stepped onto the red carpet at the screening of A Hidden Life wearing a backless, beaded dress — that showed off her bum in all its glory.

The bodice was a G-string leotard that featured a see-through train that put her behind on full show to the waiting crowd.

Trinh is one of Vietnam’s most recognised models and fashion designers known for her self-titled line Ngoc Trinh. In 2005, she was named Photogenic Supermodel Vietnam.

Trinh was also spotted at the glitzy Chopard party the night before, rubbing shoulders with guests including newlyweds Nick Jonas, 26 and Priyanka Chopra, 36.

Hollywood actress Eva Longoria also wore a dangerously daring gown on the red carpet at Cannes last week — where she appeared to reveal more than she initially bargained for.

The 44-year-old wore a glamorous blush designer dress that put her in a compromising position when a gust of wind appeared to blow the racy gown apart.

Eva kept her cool, grabbing the material of her dress with her hands and preventing an embarrassing wardrobe malfunction.

Despite her outfit mishap, the mum-of-one stunned at the glitzy event, rocking her custom satin gown by designer Alberta Ferretti.