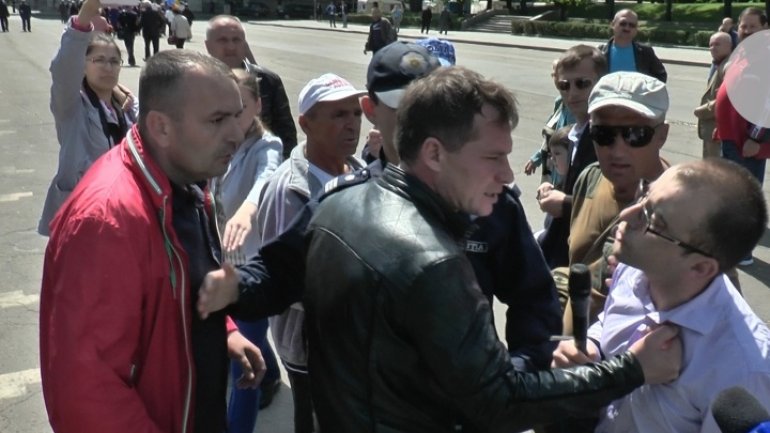 The station Jurnal TV of the fugitive gangster Victor Ţopa hid that Today.md’s reporter, Vadim Ungureanu, had been assailed by representatives of the DA party. That’s what the assertion of the journalist Gabriel Călin is.

He posted a video from Jurnal TV’s archive on Facebook, which is to prove that.

In the images hidden by Jurnal TV one can see clearly that Vadim Ungureanu was forcibly taken out from the Culture House in Cimişlia and hit by DA Platform supporters. Namely the party leader, Andrei Năstase, called them to do so in June last year.

Vadim Ungureanu fell because of the caused pains. Then he was squandered by Andrei Năstase and his supporters.

They prevented him from attending the rally, though it was in a public institution.

The police opened a criminal probe on this fact. Earlier, other cases were recorded when DA Party leaders, backed by the fugitive felons Victor şi Viorel Ţopa, assailed the journalist Vadim Ungureanu.

At a news conference held by DA leaders in downtown Chisinau, the today.md reporter was hit in stomach by a protester. Then, media-freedom NGOs expressed their concern regarding the cases of aggression on journalists.