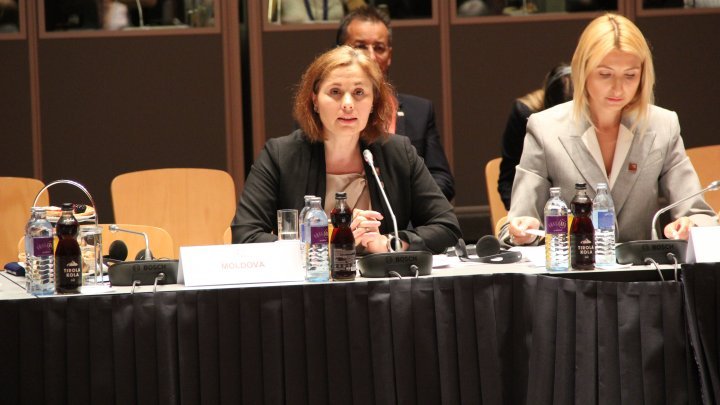 Justice Minister Victoria Iftodi attends the 5th Informal Meeting of the Ministers of Justice and Internal Affairs of the Eastern Partnership member states in Innsbruck, Austria.

Discussions at the meeting focus on recent developments in the justice sector, the promotion of the rule of law and the integrity of justice actors, and the fight against corruption in the judiciary.

In his speech Minister Victoria Iftodi presented the progress in reforms in the justice system, namely the legislative measures regarding the accountability of judges, the criteria for their selection and promotion and the strengthening of the capacities of the Superior Council of Magistracy.

The Minister of Justice also addressed the efforts and actions undertaken by the Republic of Moldova in the fight against corruption, through the creation of specialized institutions such as the National Integrity Authority, the Criminal Goods Recovery Agency and the Anti-Money Laundering and Prevention Service.

"Making progress will depend heavily on the actors in the judiciary, because justice is practically the only domain of state power that can not be interfered with by administrative instruments. It will therefore be necessary for a concerted effort from the Government, judges, the press and society, as well and support for development partners, "said Victoria Iftodi.

Minister Iftodi discussed with Ms Věra Jourová, the European Commissioner for Justice, Consumer Protection and Gender Equality, about cooperation on the justice sector between the Republic of Moldova and the European Union, and a future bilateral meeting was established.

In this context, Victoria Iftodi has encouraged EU assistance, through a possible cooperation project, to establish a unique methodology for systematically conducting, every 2-3 years, national level surveys on justice satisfaction at national level. would also measure real progress in the fight against corruption in the judiciary.

Minister Iftodi also met with Fikrat Mammadov, Minister of Justice of the Republic of Azerbaijan. It has been agreed to establish bilateral institutional relations in the field of justice and the exchange of experience between the two Eastern Partnership member states.

We mention that the ministers of justice from the Eastern Partnership member states, Bulgaria, Estonia, Austria, Romania, as well as officials from the European Commission, the agencies and institutions of the European Union are present at the meeting.

We recall that the First Informal Meeting of the Ministers of Justice and Home Affairs of the Eastern Partnership Member States was held in Luxembourg in October 2013. Then the Ministers adopted a joint declaration which stipulated that the Eastern Partnership states ensure that European standards are met in legislation on the functioning of the judiciary in an independent, efficient, impartial and accountable manner.