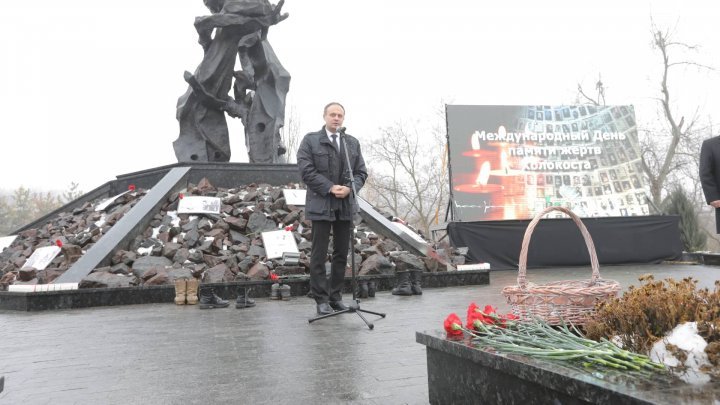 Chisinau commemorate victims of the Holocaust today during a Requiem Mass meeting at the Victims of Fascism Memorial.

"On behalf of the Republic of Moldova and all the country citizens, I pay tribute to the victims of the worst tragedy and we honor the survivors. We have to learn the tragic lessons of history. Let's be more tolerant, more open, more constructive and respectful to each other", said Andrian Candu, Parliament Speaker.

"Holocaust is the lesson that each of us has to learn to be human being. Our duty is remember to commemorate the 6 million Jewish people, 1.5 million children among them, who became martyrs all over the world. We have to do everything not to repeat the tragedy", said Tali Ploskov, Deputy Chair of the State Knesset.

As a sign of profound gratitude for martyrs, the State of Israel, through the Yad Vashem Institute, based on a special law of the Knesset, confers the honorary title "Right among peoples".

79 people from the Republic of Moldova received this honorary title.

President of the Jewish Community of Moldova, Alexander Bilinkis thanked the authorities for the action program organized to commemorate the victims of the Holocaust and for their political will.

Alexander Bilinkis announced that "Rights among people" Alley will be inaugurated at the "Victims of Fascism" Memorial.

The meeting organized by the International Holocaust Victims Remembrance Day was attended by deputies, ministers, representatives of international organizations and diplomatic missions, members of the Jewish and Romani communities.

The Moldovan Parliament condemned the Holocaust by adopting in July 2016 a political statement accepting the report of the International Commission on the Study of the Holocaust.

The National Holocaust Remembrance Day is marked annually in Moldova since 2015, according to a decision approved by the Parliament.